Sentenza (in the original)
The Bad

The Good, the Bad and the Ugly

Looking for "jobs" and completing them.

Murdering in cold blood.
Interrogating and abusing others.

Claim the $200,000-worth of stolen Confederate gold before Blondie and Tuco do.

Kill Tuco and Blondie (both failed).

Angel Eyes (Sentenza in the original Italian version), also known as "The Bad", is the titular main antagonist in Sergio Leone's 1966 legendary western film The Good, The Bad and The Ugly.

He is a traitorous and cruel assassin who crosses path with the other two titular characters, all looking for a stash of stolen Confederate Gold, worth $200,000. He has become one of the most iconic villains in film history.

He was portrayed by the late Lee Van Cleef.

Angel Eyes was a ruthless and cunning killer, who has been hired to get clues on the whereabouts of a man called Jackson, finding out he has changed his name to Bill Carson and has gone missing. Upon being told that a fortune in cash is in the middle of this thing, he kills Carson's former associate and his own employer and goes on a search by himself. After learning that Carson is with the Confederacy, he gets a job as a Sergeant at a Union prison camp in case the man is captured.

When Blondie (The Good) and Tuco (The Ugly) fall in this camp, he deduces that Carson is dead and that Tuco was one of the last people to see him alive. He gets one of his henchmen to brutally beat Tuco in order to find out about the money, which works, as he reveals the name of the cemetery it was buried at.

However, Angel Eyes then recruits Blondie as a member of his gang, since he knows the specific grave where the treasure is, and offers him a 50/50 deal. In the meantime, Tuco has been put on a train which is headed to a far town where he is to be hanged, but he manages to escape and kill his guard (thus getting revenge for the beating, too). Blondie eventually breaks free from Angel Eyes' custody and reunites with Tuco, reaching the cemetery after spending a day and a night at a Union fort.

While they are looking for the money, Angel Eyes suddenly shows up for the final duel. In the ensuing duel, Blondie kills Angel Eyes, whilst Tuco fails to shoot either as Blondie had unloaded his gun the previous night. Ironically, of the three main characters, Angel Eyes is the one who (explicitly) murdered fewer people throughout the film; yet he clearly is the most vicious, as he takes a certain joy in killing and has the cold blood to joke with Tuco during the latter's torture and interrogation.

A much darker counterpart of Blondie, Angel Eyes is a charismatic, relentless, dangerous, and greedy bounty hunting outlaw. Unlike Blondie, who despite being a bounty hunter does have a sense of honor and sometimes does the right thing, Angel Eyes is callous, traitorous, and cold. This is shown by how he killed his own employer despite being paid by him to kill Stevens and laughs at his death, or how he enjoyed torturing Tuco and beat up Bill Carson's widow.

He has no problem killing children, such as Steven's eldest son, who he immediately guns down upon hearing him after killing Stevens. Even after forming a partnership with Blondie to find the gold after sending Tuco away to be executed, Angel Eyes is very quick to betray others on a whim, which is seen when he sends his men to kill Blondie once he reunites with Tuco.

Once he became a Union Sergeant, Angel Eyes is also shown to an incredibly abusive authority figure who has no regard for any of the prisoners, and systematically puts them through cruel torture sessions to try and find information about the buried cache of gold while sadistically forcing several prisoners of war to play music to cover up his torture sessions. Angel Eyes is, ultimately, willing to do anything to make a profit at the expense of other people's lives.

But with all of that said, he does show genuine sadness while watching a group of wounded soldiers, and he has the decency to let their captain keep a bottle of whiskey out of sympathy too. This is the only time in the movie where he ever shows any humanizing qualities (though this scene was cut in the US international version). 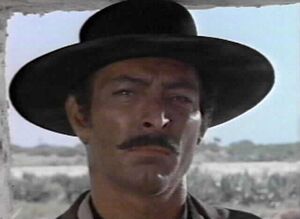 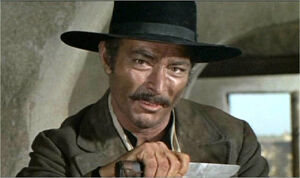 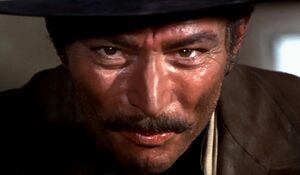 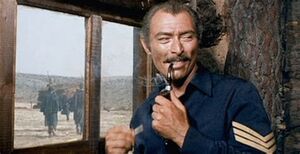 Angel Eyes as a Union Sergeant. 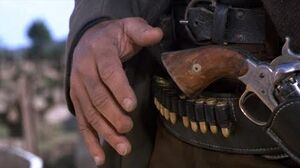