Member of Project Mayhem and the Space Monkeys

Angel Face is the secondary antagonist of the 1996 novel Fight Club, as well as its classic 1999 movie adaptation of the same name. He is one of the head commanders of the Space Monkeys (only behind Tyler Durden and The Narrator), a Fight Club regular and a high ranking member in Project Mayhem.

He was portrayed by Jared Leto, who would later portray The Joker in the DCEU movies, Harry Goldfarb in Requiem For A Dream and Niander Wallace in Blade Runner: 2049.

Angel Face appeared as a Fight Club regular and became of the first to become part of Project Mayhem being the third to pass the initiation test. He became Tyler's second in command after he succeeded in many tasks of terrorism and intimidation. The Narrator became extremely bitter and jealous over Angel Face (not realizing that he himself was Tyler) and so he challenged him to a fight one night in the club and brutally attacked Angel Face leaving him injured to the point of being hospitalized. Upon his return he was hideously disfigured with his pretty boy features now gone and his face swollen up and bruised, he was visibly slightly intimidated by The Narrator/Tyler as well. After Bob's death Angel Face suggested to bury him much to The Narrator's disgust, he then joined in the others in chanting Bob's name in respect for him. He makes no later appearance in the book or movie.

Ten years after the events of the original, Angel Face returned even more disfigured after attending Fight Club for so long. He had a rematch with the narrator which he seemed to gain the upper hand in until Tyler took over and hit Angel Face against the ground multiple times before strangling him to death. 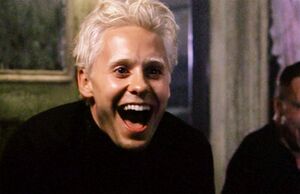 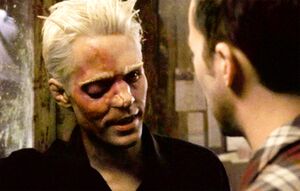 Disfigured Angel Face
Add a photo to this gallery 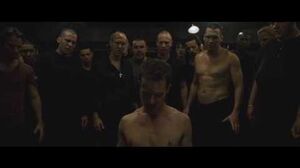 Retrieved from "https://villains.fandom.com/wiki/Angel_Face?oldid=3578816"
Community content is available under CC-BY-SA unless otherwise noted.