Various depending on issues.

Cannibal Psychopaths
The Angel Gang is a fictional group of villains appearing within the Judge Dredd comic strip in the weekly comic book 2000 AD. They are "a family of scruffy, backwoodsy, outrageously cruel thugs" from the Cursed Earth near Texas City who vie with the titular Judge Dredd.The most notable member is Mean Machine Angel.

The Angel Gang were created by the writers John Wagner and Alan Grant and the illustrator Mike McHanon for the Judge Dredd comic strip in 2000 AD. They first appeared in Prog (issue) 160 of 2000 AD as the antagonists of the "Judge Child" storyline, during which each of the four members were killed of. The Angel Gang were "hugely popular with readers", leading Wagner to introduce a fifth Angel, Fink Angel, in Prog 193 (first published in 1981). In the same storyline, Wagner also introduced the background character of Ma Angel in a flashback.

Wagner reintroduced Mean Angel in the Destiny's Angels storyline that ran from Prog 281 to Prog 288 (first published in 1982), stating "he was just too good a character to throw away, and somehow he suited miracle rebirth". Mean Angel went on to become a recurring antagonist until Prog 1536 (first published in 2007) in which he was effectively written out of ongoing storylines. He was seemingly killed off once more in a 2015 story appearing in Judge Dredd Magezine.

In Prog 958 (first published in 1995), Wagner reintroduced Elmer and Junior Angel, retconning their deaths. The "resurrection" of Elmer and Junior proved unpopular with readers, with author John Wagner later stating in an online interview: "We got away with resurrecting Mean Machine, I think. He was just too good a character to throw away, and somehow he suited miracle rebirth, but I confess in hindsight Pa and Junior were a step too far. I don't think I'll be using them again".

Since 2007, the appearances of the Angel Gang in 2000 AD have largely been restricted to flashbacks and strips set prior to their deaths. The 2007 strip "Before They Wuz Dead" by Simon Suppier fleshed out the character of Link Angel and explored the relationships between the family members. In 2008, Wagner introduced another member of the Angel Gang, Ratfink. Ratfink made a second appearance in 2012. The Angel Gang returned in 2015 in "Angelic", a strip by Gordon Rennie that further explored their backstory.

As of 2015, the surviving members of the Angel Gang in the current storyline are Elmer Angel, Junior Angel, Ratfink, and Mean Junior.

In the "Judge Child " storyline, the Angels (minus Fink) have escaped from detention in Texas City, and are anxious to get off-planet. Hearing of the Judge Child's precognitive abilities, they obtain him from a carnival worker who's using him in a fake fortune-telling racket and take him along. The value of a child who could see and perhaps even influence the future was obvious, but the Angel Gang had to travel a long way before they could find a way to turn a decent profit from his capture. They finally arrived on the Planet Xanadu, where a mysterious and dangerous robot called the Grunwalder ruled over his own independent Kingdom. Pa Angel was keen to do a deal with the robot, hoping to exchange Owen Krysler for considerable riches - as well as protection from the Mega-City One Judges. However, Dredd caught up with the Angel Gang on Xanadu and he was prepared to kill them all in his quest for the Judge Child. Link was the first to fall, followed by Mean Machine, then Junior and finally Pa.

Later, Fink comes to Mega-City One to avenge his kinsfolk, murdering his way through the surviving members of the Xanadu mission. Dredd and Hershey gain the upper hand before their turn comes and Fink is imprisoned for the next three years. At this point Mean Machine is resurrected by the Judge Child to be sent back to Earth for revenge on Dredd, and joins forces with a freed Fink. Fink does not survive this second encounter with Dredd, and Mean begins a long on-off period of incarceration in Mega-City One, becoming a recurring antagonist for many years, with frequent jailbreaks and recaptures. There have also been some stand-alone stories featuring the Angel Gang, notably one where they were travelling in time after Mean Machine hijacked a time machine from a university and, not knowing what to do, decided to go back in time and find his Pa, who was always able to come up with a clever plan.

In 2000 AD, Prog 958's Dredd story "Awakening Of Angels", John Wagner 'resurrected' Pa and Junior Angel by revealing that when Dredd threw them into the volcano they never actually died, but were instead trapped in a crystal-like substance which held them in suspended animation. This proved an unpopular plotline. Many readers felt it was cheesy and out of keeping with the spirit of 2000AD, which was never afraid to kill off its characters. Wagner later regretted the move, stating in an online interview, "We got away with resurrecting Mean Machine, I think. He was just too good a character to throw away, and somehow he suited miracle rebirth, but I confess in hindsight Pa and Junior were a step too far. I don’t think I’ll be using them again." Their resurrection has since been quietly ignored.

In 2007 they appeared in two consecutive stories in Judge Dredd Megazine, focusing on the clan's earlier adventures: Before They Wuz Dead (an Angel Gang story) and Pizen Impossible (a Fink solo story), both by Simon Spurrier and Steve Roberts. The first strip fleshed out Link, revealing he resented that Junior got all of Pa's attention and that he had to do all the duller work (like cleaning the guns) while his brothers got to kill & interrogate people.

The final member of the Angel Gang to encounter Dredd was Ratfink, a poisoner and highwayman, in 2130. Ratfink was ultimately captured by the Judges at considerable loss of life, with Dredd ordering him interrogated and executed. In 2134, Ratfink escapes from custody and captured Dredd, torturing him until Dredd took him prisoner once again.

The Angel Gang appeared in the movie version of Judge Dredd. Like many of the characters who appeared in the movie, they looked much like their comic book counterparts but acted very differently; the movie's Angel Gang were represented as religious fanatics and cannibals. Dredd refers to them as the "legendary Angel family" and explains that they are "Cursed Earth pirates, murderers, scavengers, and, of course, scumbags". Pa Angel was portrayed by the late Scott Wilson, Mean Machine was portrayed by Christopher Adamson, Link was portrayed by Phil Smeeton, and Junior was portrayed by Ewen Bremner. Fink did not appear in the film. Dredd encounters them when his shuttle is downed by them and they capture him, but he quickly frees himself and kills them all in combat.

The novelization based on the film took Pa's fanaticism even further to "keep out evil spirits", Pa had sewn shut his ears, eyes, and mouth. He thus communicated in a series of muffled words and grunts.

The Angel Gang: "Before they wuz dead" (by Simon Spurrier and Steve Roberts, in Judge Dredd Megazine #258-ongoing, 2007) 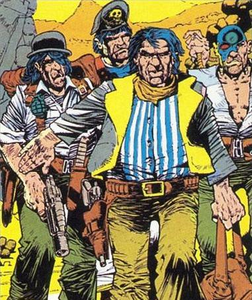 Pa and the Angel Gang. 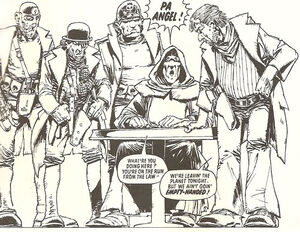 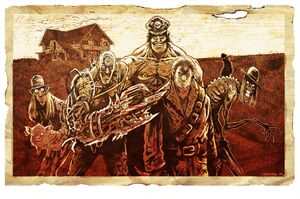 The Angel gang as depicted in the 1995 Judge Dredd movie. 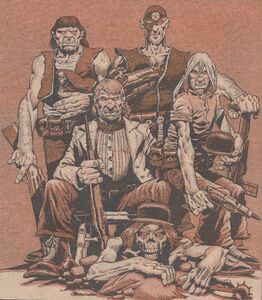 Add a photo to this gallery
Retrieved from "https://villains.fandom.com/wiki/Angel_Gang?oldid=4043746"
Community content is available under CC-BY-SA unless otherwise noted.