Villains Wiki
Register
Don't have an account?
Sign In
Advertisement
in: Female, Vengeful, In Love,
and 13 more

She was portrayed by Tamara Feldman, who appeared as main villainess Kyla Willowbrook in "Skinwalker", a second season episode of Smallville

The episode begins with Angela in an argument with her boyfriend, Matt, which ends with her leaving in her car and driving off in tears. While driving, Angela loses control of her car and ends up in a fatal crash. However, Angela is revived from her grave and goes on a revenge mission, beginning with killing Matt at his home. It was revealed that Matt cheated on Angela with her best friend Lindsey, and Angela set her sights on killing Lindsey before Sam and Dean arrive and save her.

It is also revealed that Angela's father's assistant, Neil, used a spell to revive her, mainly because he was secretly in love with her, but after Angela discovers that Neil's devotion to her isn't as strong, she kills him. Angela then goes after the Winchesters, with Sam allowing her to chase him to her grave, which Dean puts her back in after killing her with a wooden stake. 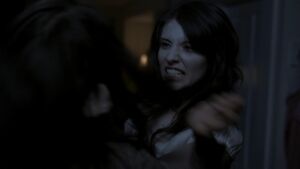