One of the Good Ones

Stop Whiterose after realizing that her true goals are to destroy E Corp (failed).

Angela Moss is a major antagonist in the third season of the USA Network crime-thriller-drama TV Show, Mr. Robot. In season 1 she served as the deuteragonist and in season 2 a recurring protagonist who wants to avenge her mother's death which can be blamed on E Corp, but becomes increasingly cold during the episodes leading up to season 3 when she becomes a major antagonist and starts working together with Dark Army, Mr. Robot and Tyrell Wellick on the project Stage 2.

She was portrayed by Portia Doubleday, who also portrayed Chris Hargensen in the 2013 version of Carrie.

Angela was a childhood friend to main protagonist Elliot Alderton. She was most likely his best friend, as well as his only friend. A flashback scene is shown where she is at a family party that Elliot isn't at. Elliot's dad, Edward, says to Angela while she's watching TV that if Elliot ever needs somebody to talk too, or a "push", as Edward puts it, she should be there for him. Her mom had just died during the Washington Township leak, an event that can be blamed on E Corp.

In season 3, Angela joins forces with Whiterose, Irving, Mr. Robot, and Tyrell Wellick, who are working on completing the Stage 2 project which would bring down E Corp. While Whiterose and Irving know about what the project truly is about, blowing up 71 E Corp buildings, the other people involved in the project are rather oblivious. However, considering Mr. Robot is an alternative personality to Elliot Alderton, who is against Stage 2 and doesn't trust Whiterose, Angela psychologically abuses Elliot with the goal of driving him completely insane so that Mr. Robot would be summoned instead, as he's more willing to participate in Stage 2.

Later in the season, Whiterose manages to carry out the project and successfully blows up 71 E Corp buildings, killing thousands. When Angela sees that this is what Stage 2 really was all along, she goes completely insane and rewinds the news broadcast about the attack she was watching in an attempt to justify her actions as rewinding the news broadcast makes it look like the explosion never happened.

In the final episode in season 3, E Corp CEO Philip Price has a meeting with Angela, as he has something important to tell her. Turns out, Price is her biological father. They also talk about Stage 2, and they both agree on going against the Dark Army, and that she just has to accept that she can't do anything about what Stage 2 caused now, she just has to learn to live with it.

The first episode "Unauthorized" starts where season 3 ended. Philip Price and Angela are finishing their conversation, and once it's done Price walks away. However, a group of Dark Army soldiers come from behind and shoot Angela to death. This angers Price, who has had enough and is ready to destroy Dark Army. 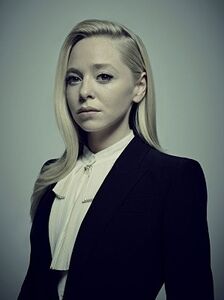 Angela's promotional photo for Season 3.
Add a photo to this gallery

Retrieved from "https://villains.fandom.com/wiki/Angela_Moss?oldid=3510741"
Community content is available under CC-BY-SA unless otherwise noted.