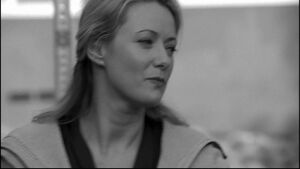 Angeline Dilworth is the main villainess from the Monk episode, "Mr. Monk and the Voodoo Curse."

She was played by Claire Rankin.

Angeline Dilworth is a registered nurse and the niece of magnate Robert Byrd, who was the victim of a perceived voodoo-related death. Various good luck charms are found all over the house when Monk investigates the crime scene, and when asked about them, Angeline stated that he was highly superstitious.

It turned out that Angeline killed her uncle with an untraceable poison and placed the charms in the house to make it appear that voodoo caused his death. Before doing so, Angeline placed voodoo dolls in the houses of Martha Moxley and Ralph Ferris, who later died in tragic accidents. Knowing that Monk was possibly on her trail, the evil Angeline sent a decapitated voodoo doll to Natalie Teeger, who was strongly convinced that voodoo is real. After an attempted "exorcism" results in Natalie falling ill, Angeline is on the call. While in the ambulance, Natalie figures out that Angeline sent the doll, which lead to a scuffle between the two before Angeline is apprehended. As for motive, Monk's summation suggests that Angeline killed her uncle for financial reasons. 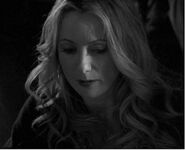 Add a photo to this gallery
Retrieved from "https://villains.fandom.com/wiki/Angeline_Dilworth?oldid=1985895"
Community content is available under CC-BY-SA unless otherwise noted.