Princess of the Labyrinth

Tormenting the descendants of the puzzle box maker.

Angelique is one of the two main antagonists of Hellraiser: Bloodline alongside Pinhead. She is a demon princess who inhabits the body of a sacrificed woman and gets turned into a Cenobite later in the movie.

She was portrayed by Valentina Vargas.

An unnamed woman was summoned by a French Nobleman named Duc De L'Isle after he performed a sacrificial ritual that caused the Lament Configuration opened a gateway to hell and named her "Angelique (French for Angelic)". Angelique later conspired with Jacques, De L'Isle's servant to kill him, and Angelique murdered the nobleman under Jacques' orders.

Since Jacques had been made her master because of the ritual, Angelique continued to keep Jacques alive for 200 years. However, after Jacques refused to allow Angelique to investigate the Le' Marchant heir in New York, Angelique killed him and went off to New York.

She discovered that the heir, John, had created a building similar to the Lament Configuration that had the potential to be used to create a permanent gateway to hell. She then had summon solve the puzzle box so she could summon reinforcements from hell. However, instead of an army of demons, Pinhead emerged and informed her that things had changed since she left Hell.

Angelique and Pinhead then tried to force John Merchant to use his building to open a permanent gateway to hell, with Pinhead using the Chatter Beast to hold his wife and son hostage. They also turn two twin security guards into the Siamese Cenobites.

John attempts to trap them, but Pinhead decapitates him with one of his chains. However, John's wife manages to use the puzzle box to send them back to hell. Angelique's body was mutilated until turned into a Cenobite by Pinhead, presumably as punishment for her failure. Angelique and the Cenobites were later summoned to the Space Station Minos in the year 2127 by Paul Merchant. 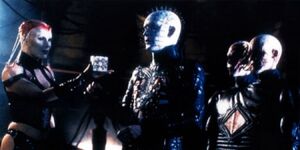 Angelique with the other Cenobites
Add a photo to this gallery

Retrieved from "https://villains.fandom.com/wiki/Angelique?oldid=3872197"
Community content is available under CC-BY-SA unless otherwise noted.