Attempt to make Barnabas love her or destroy anything that Barnabas care about, even if it ultimately a genocidal act against Collins' family bloodline (failed).

Angelique Bouchard is the main antagonist of Tim Burton's horror comedy film Dark Shadows. She is a witch who is obsessed with vampire Barnabas Collins.

She was portrayed by Eva Green, who also played Artemisia in 300: Rise of an Empire, Ava Lord in Sin City: A Dame To Kill For, Vesper Lynd in Casino Royale, Miss Gribben in Cracks and Eve Connors in White Bird in a Blizzard.

In a single brief childhood scene set in Liverpool, England, 1760, Angelique's early interest in Barnabas is established. The young Angelique, around ten years of age, is portrayed by actress Raffey Cassidy. She is depicted with her mother, a servant, departing on a sailing ship from the Liverpool docks for "the New World", along with the Collins family. The childhood scene also helps establish Angelique's class-based resentment of the Collins clan's privileges, for she is cautioned by her mother that she must accept her place, servitude, in the social structure of the time and not even gaze freely upon her "betters", including Barnabas.

As she develops into an attractive, dark-haired young woman, Angelique seems to follow in her mother's footsteps as a servant to the Collins family in their New World mansion, Collinwood. However, she develops skills in witchcraft and, whether through natural or magical charms, arouses the amorous interest of the Collins heir, Barnabas. Though he clearly experiences carnal pleasure with her, when Angelique asks him to affirm love for her, Barnabas candidly rejects the notion. Instead, he falls in love with a young woman closer to his own social standing, Josette duPres.

Relegated by the prevailing attitudes of the era to scrubbing the Collins floors while the man she had hoped would love her openly romances another of her "betters", Angelique sees Barnabas and Josette tenderly embracing. Driven by romantic and class jealousy, she begins to use the dark empowerment that witchcraft has provided her to wreak revenge upon Barnabas and the Collins family, and to improve her own fortunes.

Her first act of retaliation is a magical spell that kills Joshua and Naomi Collins, who are Barnabas Collins' parents and the founders of the American Collins lineage. In the film's first depicted supernatural act, Angelique crushes a small figurine of a seahorse, using her fingers to crumble it into pieces, as she intones, "Make the high and mighty low / Arrogant creatures, down you go!" This phrasing makes clear that Angelique is driven not only by anger at Barnabas' refusal to love her, but also by resentment of her status as a servant in the household of the far more privileged Collinses. And as she concludes this incantation, a large piece of decorative rooftop statuary, shaped like a seahorse, totters and plummets to the ground, crushing Joshua and Naomi as they take an evening stroll below.

Angelique then commits the two pivotal acts of vengeance that drive the subsequent action of the film. First, she recites a second incantation: "If he doth another choose / To lend his heart and eye / Then magic shall the slighted use / That all he loves shall die!" This recitation brings about the death of Josette, who, bound by the spell, is compelled to leap from Widows' Hill. Then, as Josette's fate is sealed and the despairing Barnabas attempts to follow her in death, Angelique places the curse of vampirism upon Barnabas so that his suffering cannot end. (While playing a similar role in the plot to events of the original daytime serial, the film depiction has the sequence reversed, with Josette magically induced to kill herself before Barnabas' vampire curse is evident; in the original series, Josette flees from Barnabas and hurls herself from the cliff in horror upon discovering that Barnabas has become a fanged bloodsucker as a result of Angelique's curse.)

According to the later recounting of "legends" by Elizabeth Collins Stoddard, Barnabas tried to persuade the people of Collinsport that Angelique has placed him under a curse, but they found him deranged. However, the film shows the actual events in 1776, when Angelique herself leads the townspeople in a torch-carrying mob to Collinwood, points out Barnabas, declaring "There's the monster!" and facilitates his imprisonment in a buried coffin for almost two centuries, until 1972 when the film's principal events are set. The townspeople appear to harbor no suspicion of Angelique's being a practitioner of black magic or of her responsibility for Barnabas' transformation into a killer.

Over the next 196 ensuing years, the Collins family fortunes decline. (Apparently there were heirs other than Barnabas, for both Collinwood and the family fishing business endure, though both decline into near-ruin.) Angelique, adopting a series of guises through the decades to conceal her true age, establishes a prosperous rival to the Collins fishing business that she calls Angel Bay Seafood and becomes a well-known and at least superficially highly regarded pillar of the community of Collinsport. As the film reaches the events of 1972, Angelique is shown to have changed her naturally dark hair color to blonde and now goes by the name "Angie" Bouchard. She (in different guises over the past centuries) has been responsible for the decline of the Collins family and its fortunes. When she learns of Barnabas' escape from his prison, she confronts him and mocks him as being too out-of-date to do anything to stop her.

She sets up a meeting with Barnabas in her office and tries to convince him to sell the Collins fishery to her. She tries to win him back by seduction, for if he doesn't, she will kill Victoria and take away everything he loves. She succeeds, which results in a torrid act of supernatural lovemaking between them. However, because he loves Victoria, Barnabas tells her that he cannot succumb to her charms no more and asks her to forgive him. Lovelorn once again, Angelique then clutches Barnabas' hand and tells him that if she cannot have him, she'll destroy him. Unharmed by this, Barnabas still leaves. The following night, she went uninvited to the Collins party in a sparkly red dress looking for Barnabas, and not only learns about Barnabas' feelings for Victoria but become very angry when she witnesses Barnabas and Victoria kissing.

The next night after Barnabas killed Dr. Hoffman for using his blood, Barnabas meets with Angie again and demands she end his curse. She gives him one last offer, she in turn demands that Barnabas become hers for all eternity. When Barnabas refuses, she uses her powers to chain him inside the same casket she had previously locked him in and has the casket transported to the Collins family crypt, she put a pair of her red panties in the coffin, saying that he will think a little more about them. She them blows up the Collins family rebuilt canning factory via spell and then publicly accuse Barnabas not only of the arson of the cannery but also of several murders, including the workers, the hippies, and Dr. Hoffman.

Barnabas and Angelique battle inside the mansion, using spells to kill Barnabas. Barnabas then grabs Angelique by her neck and throws her up into Carolyn's room, who's revealed to be a werewolf. Elizabeth and Willie join in the fight on Barnabas' side, but the three are overcome by Angelique's magic. Carolyn attacks Angelique, but Angelique fights back and knocks Carolyn unconscious, as she reveal that she sent a werewolf to bite her when she was a baby. They continued the fight until one of the statues holds Barnabas. Angelique then sets Collinwood on fire. When it looks like Angelique won, David appears and tell her to leave him alone, saying that she will kill him first. She confronts him and with a boastfully taunt, asks what will he do. At that point he summons the ghost of his mother, which she has killed. The ghost charged her with a single powerful strike and haunting scream that throws her into the chandelier. Both of them crashed into the floor, where she is broken up.

During these final scenes, Angelique's face has begun to crack and collapse in a manner resembling that of a porcelain doll or eggshell, and as Barnabas speaks with her in her (apparent) dying moments, she is revealed to be virtually hollow inside. Barnabas then admits that there was a time a when he may have loved her, that he would've want to spend eternity with her. As the last ditch to ask Barnabas to love her and proof against his assertion that she has no heart, Angelique breaks her chest plate and pulls out her actual heart, literally offering it to Barnabas. However, Barnabas rejects Angelique's offer, knowing that her heart is incapable of loving and that she only wants to have him for herself, saying that's her curse. Her throbbing heart literally broke as it crumbles to pieces, and she finally succumbs to her death.

In the end, Angelique died in vain, as Victoria, whom was under her spell immediately saved by Barnabas by turning her into a vampire, once again, thwarting Angelique's proclaimed intention that if she cannot have Barnabas, no one else will.

While her principal villainy in the film is supernatural hostility against the Collins family, Angie is also depicted as having more generic qualities intended to turn audiences against her. She is a rather callous businesswoman who enjoys imperiously giving orders ("Start cracking the whip!"), demands unrealistic productivity from her workers, and is indifferent to others' suffering. ("Accidents happen". she shrugs when initially told a group of eleven workmen from the town have been killed the night before, uninterested until she learns that their throats were torn out at the same location where she'd presided over Barnabas' burial 196 years before.) She is also depicted as a bit vain, driving through town in a flashy red Plymouth Barracuda convertible, smiling and waving at the townspeople, and checking herself in the mirror. She hypocritically characterizes the original Collins family as "looking down their noses" at others, while later proclaiming herself (and Barnabas, for whom she still carries a determined torch) better than the other townspeople. Scoffing at Barnabas' threats to expose her as a witch, she boasts that the townspeople "are my worshipers now", declaring herself the "last big fish" in the "little pond" of Collinsport. She gloats that the Collins family are like ants she has enjoyed burning beneath a metaphorical magnifying glass, and attempts to compel Barnabas to "rule" the town alongside her.

In spite of her love with Barnabas, she was actually never capable of loving and only wants to control him as confirmed by Barnabas himself. This was also shown when Barnabas denied her at her first attempts to win his heart, she ultimately killed his parents and his lover as well as turned him into vampire as the retaliation (though her curse to turn him into vampire simply for her had another chance to win his heart that eventually vain). However, her sheer of hostility against Collins' family out of Barnabas rejecting her for the last time ultimately drove her to commit somewhat genocidal act against the family that she despised (save to Barnabas), as she forces Barnabas to watch as she kills what was left to his family before destroyed by the ghost of David's mother. Even at the throes of death, Angelique tried to assert that she does have a heart by literally offering her own to Barnabas, only for Barnabas to quietly refuse it since he is aware that Angelique's heart is still incapable of loving. 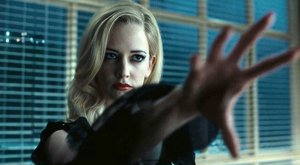 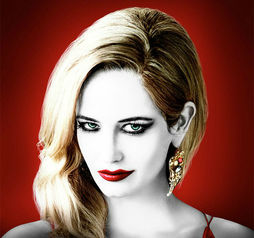