AoD
Deadbeats (by The Lost MC)

Expand their operational territories.
Win gang wars and come out on top.

The Angels of Death are an outlaw biker gang operating around Algonquin, where they frequently hang out at their clubhouse located in North Holland, Liberty City. They received heroin from the Triads and deal cocaine with the Spanish Lords. Like the case of the Albanian Mafia and the Ancelottis, the AOD act as extra muscle for the Triads. Unlike The Lost MC, who have an exclusive Liberty City chapter, the Angels of Death have numerous chapters including ones in the UK, Europe, Scandinavia, Canada and Australia as well as one in nearly every state of America. The Angels of Death also have a theme park in Florida and sell branded merchandise such as bed linen, books, party sets, diapers and even dildos.

According to their official in-game website, "angelsofdeathonline.com", the AOD started in San Andreas in 1949 as a small club for people unsatisfied with a non-segregated society. Lester Arnold is the leader of the Angels of Death and was born in San Fierro, along with Road Captain Joe Jon Johnson.

They are operating around Beechwood City, can be seen around the Burger Shot and basketball court in Beechwood City, and can also be found in BOABO. Also some of the are either in the LC most wanted list and/or they are with them.

The Lost and Damned

Angels of Death members do not spawn in Beechwood City or BOABO anymore, they only spawn around their clubhouse in North Holland. In The Lost and Damned, the player can enter The Angels of Death clubhouse during multiplayer.

Angels of Death members do not spawn in Beechwood City but they do in BOABO. They also spawn in North Holland near their clubhouse and Northwood, near Luis' safe house.

Hsin labels the Angels of Death as one potential suspect for the sabotage of the Triads. He hires Lester to team up with Huang to investigate. Lester attempts to gain access into the gang in order to obtain intel, however the drugs and biking as part of the admission test is overwhelming for him, thus Huang Lee assists by taking over on the biking stunts, attacking The Lost Brotherhood members and obtaining drugs. However, after having sex with Meredith, The Angels of Death leader's girlfriend, Lester learns that the gang is innocent in regard to the Triads' sabotage.

During a random event with either Franklin Clinton or Michael De Santa, a member of The Lost MC who killed a LSPD Officer tells one of them that the Angels of Death are "finished", having no more chapters anywhere in the United States. 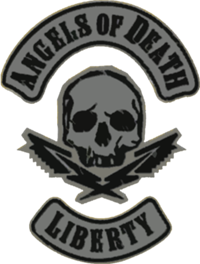 A logo of the Angels of Death Motorcycle Club.