Psychologically torturing his victims before killing them.

Kill for his own amusement.

Psychologically break Buffy Summers and kill her friends.
Send the world into a Hell dimension.
Keep himself from being ensouled.

Angelus is the evil half of Angel and the main antagonist of the Buffyverse.

He was one of the most infamous and sadistic vampires to exist however after having a Romanian curse placed on him he was turned into Angel as retribution for over a century of tyranny as a soulless vampire, whenever Angel experiences true happiness, he loses his soul, thus reverting back to his original form.

As with his good counterpart, he was portrayed by David Boreanaz, who also portrayed Luc Crash in The Crow: Wicked Prayer and Jeremy Melton in Valentine.

Before becoming the vicious vampire Angelus, he was a human by the name of Liam, born in Galway, Ireland in 1727. His father was a linen and silk merchant of some wealth. One day, at the age of 26, after a night of his usual drunken debauchery, Liam got into a fight with his father, who declared that he was wasting his life and slapped him. Liam responded that he was what his father had made him, and left their household in a rage, his father doing little to stop him, despite his obvious grief at his son's harsh words. After a tavern brawl, he was kicked out, and followed the woman - the vampire, Darla - into an alleyway. She promised to fulfill his dreams, and show him a whole new world, and sired him, turning him into a vampire.

Liam and Darla went about killing people in his home town, until finally, Liam decided to move on, but not before killing his entire family. He took the name "Angelus", seemingly inspired by the fact that his little sister believed him to have returned to her as an angel, shortly before he killed her.

Angelus and Darla traveled the world for decades, wreaking havoc wherever they went, and creating a reputation as the most vicious and dangerous vampires in the world. Angelus had a gift for torture, both mental and physical, and enjoyed nothing more than using his dark talents to create works of "art", in the form of brutal murders and tortures.

21 years later in May 1764, Angelus and Darla killed the wife and son of Daniel Holtz, and turned his young daughter into a vampire, forcing him to kill her. Holtz then devoted himself to capturing them, and chased them across Europe. He managed to kill almost 400 other vampires in the process.

96 years later in 1860, a young woman by the name of Drusilla caught Angelus' eye. Pure, chaste and virgin, she possessed the "sight", an ability to see the future. Angelus became obsessed with her, and began torturing her by killing her loved ones in an attempt to drive her insane. She fled to a convent, and on the day she was to take her vows and become a nun, Angelus massacred the coven, killing everyone but her. He proceeded to have sex with Darla on top of her, which finally shattered what remained of Drusilla's sanity, driving her completely and utterly insane. Angelus then sired her, turning her into a vampire, so that his "masterpiece" would live on for eternity.

The two were now three, and would be for another twenty years, until in 1880, Drusilla desired a companion of her own. She took the mild-mannered and lovesick poet, William, who took the nom-de-guere "Spike" and turned him into a vampire, a new addition to their little "family". Spike and Angelus had a complicated relationship, with William both greatly admiring and resenting Angelus for his charisma and leadership, and especially resenting the fact that Angelus would regularly sleep with Drusilla.

The four became known as the "Whirlwind", the bloodiest vampires in history, Angelus chief among them.

38 years later in 1898, Angelus and the Whirlwind murdered the most beloved daughter of a tribe of gypsies. In revenge, the gypsies cursed Angelus by restoring to him his human soul, making him feel guilt for all the people he had slaughtered and the atrocities he had committed in the last 170 years, a curse that could only be broken by one moment of pure happiness. After realizing what had happened to him, Darla violently rejected him, disgusted by his new humanity. Angelus lived on his own for a while, unable to kill and feed on the innocent as he had, he turned to killing other murderers and wrong-doers, while searching for Darla.

He found her in China during the Boxer Rebellion in 1900. He tried to convince her that he could still live as they had in the past, but Darla had her doubts. She grew enraged at the fact that he protected innocents from her and would only feed on murderers, rapists and animals, and confronted him with an ultimatum; to kill and feed on a baby whose parents Darla had killed, or to leave them forever. Angelus couldn't, and saved the baby before fleeing.

Life With a Soul

In the next 90 or so years, Angelus lived a solitary life, trying to keep to himself in order to avoid the urge to feed on humans. He moved to America and took the name "Angel". Angel maintained some limited contact with humanity, but after finding himself unable to resist feeding on a dying store clerk in the '70's, he exiled himself to a life of homelessness, living on the streets and drinking the blood of rats.

He was sought out in the 1990s by the demon Whistler, who persuaded him to fight against the evil that he had once embodied in an effort to redeem himself. He pointed Angel towards the newly-activated Slayer, Buffy Summers. Angel resolved to help her in any way possible.

He followed her to Sunnydale, and made his identity known to her. The two quickly began to develop romantic feelings for each other. During this time, he met Darla once again, who had come to Sunnydale to serve the Master, her own sire, who was magically trapped underneath Sunnydale. Darla attempted to turn Angel against the Slayer, and to bring him back to their side, but she failed, and Angel killed her.

Buffy and Angel's relationship would grow complicated once again with the arrival of Spike and Drusilla in Sunnydale. Spike was initially oblivious to Angel's condition, and sought him out. Meanwhile, Angel sought out Drusilla and told her to leave town. Spike would soon find out where Angel's true allegiances lay, and instead decided to use him in a ritual to rejuvenate the sick and weakened Drusilla. Angel was captured, and Drusilla tortured him as he had once tortured her. Spike planned to sacrifice Angel in a ritual to restore Drusilla to health, but Buffy managed to intervene, saving Angel's life and temporarily crippling Spike, but not before Drusilla was restored to full health.

Spike and Drusilla planned to unleash a demon named "the Judge", who would kill all non-demonic life on Earth. Meanwhile, Angel and Buffy finally had sex after a heated battle. This would serve as Angel's moment of pure happiness, breaking the gypsy curse and removing his soul.

Unleashed once again, Angelus joined Spike and Drusilla in their plot to unleash the Judge. Buffy managed to stop them however, and Angelus resolved to completely and utterly destroy her, having a personal vendetta against her for making him love her. He began to torture her and her friends by threatening their loved ones, and taking away things they loved-such as making necklace out of Willow's fish he killed. He learned of a plot by a the gypsy woman Jenny Calendar, who had been sent by the Kalderash to ensure Angelus kept his soul. She attempted to ensoul him again, but Angelus found out, and brutally murdered her.

Angelus began to form a plan to unleash Hell on Earth, but meanwhile, Spike was growing increasingly resentful of Angelus for usurping his leadership of the gang, annoyed that he would not kill the Slayer, and jealous that he had resumed his sexual relationship with Drusilla, all while Spike was still crippled by his injuries.

Angelus got all the necessary components to open a gate to Hell, but Spike and Buffy teamed up in order to stop him. Meanwhile, Buffy's friend Willow began an incantation to restore Angelus' soul. She was successful, but not before Angelus managed to open the gate. Requiring his death to close it, Buffy ran him through with a sword, and kicked him through the portal.

Angel would return from the hell dimension, his soul once again restored, and would continue to fight for good to redeem himself. However, his true nature would never be far, always whispering in his ear, and occasionally emerging on the rare occasions when Angel lost his soul.

When Angel moved to Los Angeles, he once met a woman named Rebecca Lowell, an actress who wanted to be eternally young. She snuck a drug that simulates bliss into Angel's drink, suppressing his soul and causing him to try to torture and kill her. Although Angelus was knocked out and reverted to Angel without causing casualties this time, years later in 2003, a very powerful demon known only as the Beast arrived and began an attempt to bring forth an apocalypse. Angel had to strip himself of his soul and revert to his evil alter ego in order to defeat it, after "Cordelia" had a vision of Angelus facing the Beast in the past which Angel did not recall.  As Angelus, he lures Faith to the Beast, only to betray and kill him, not knowing it would bring back the sun. Angelus was eventually recaptured and re-ensouled after a battle with Faith. He has never been featured in the series again.

Spike after his disastrous encounter with a psychotic vampire slayer, Dana, called her a monster. He likened her to himself and Angelus. After Angel called her a victim, Spike stated "So were we, once upon a time."

During the time when Los Angeles was pulled into Hell by The Senior Partners of Wolfram & Hart after Angel betrayed them, he would find himself in conflict with a newly sired Charles Gunn. When Gunn once turned his back on Angel, Angel knew that had Angelus saw Angel commit this betrayal, that he would be proud of him. This disgusted him and though later it proved to be ill-advised, he didn't go through with killing Gunn.

As Angelus, Angel is devoid of all human emotion, save perhaps the perverse pleasure he receives from his acts of cruelty. He is also a ruthless killing machine - in other words Angelus is as bad as any of Buffy's "Big Bads" and indeed has been described as one himself. It's believed that he's more evil than any other vampire in history, even more so than his grandsire, The Master.

Angelus is powerful for a vampire and alongside Spike and Drusilla, became one of the few vampires that assaulted Buffy and survived for more than one season. The conflict Buffy had with Angelus was much more personal than any of the other "Big Bads" due to the fact she was deeply in love with Angel - arguably Angelus has caused the most emotional pain to Buffy during the series and as such is one of the most evil of Buffy's villains.

Because Angel is a hero within the Buffy universe, the transformations into Angelus rarely lasted long but when they did occur, it was always memorable and caused great tension within the group due to Angelus' penchant of attacking his opponents on a very personal level. 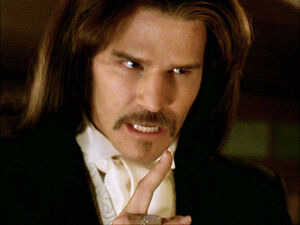 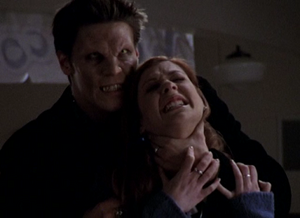 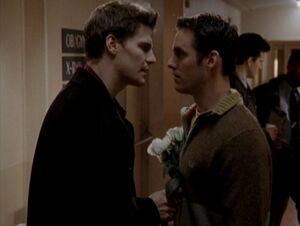 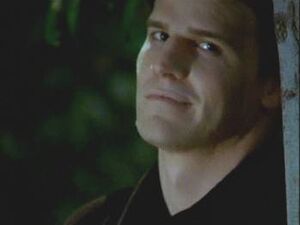 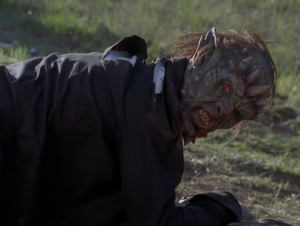 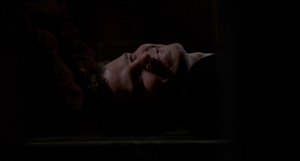 Angelus' Evil Laugh
Add a photo to this gallery

Retrieved from "https://villains.fandom.com/wiki/Angelus?oldid=4159178"
Community content is available under CC-BY-SA unless otherwise noted.