Hunting.
Collecting souls of the victims he has killed.

He was voiced by Ike Amadi who also voiced The Darkness in Skylanders: Superchargers, Jameson Locke in Halo 5: Guardians and Mollaka Danso in the 2008 video game 007: Quantum of Solace.

As a troll victim of Gunmar's war, Angor sought power to protect his people. Thus, Angor made a deal with the evil legendary hag Morgana who granted him great magical power in exchange for his soul. The witch, however, took advantage of it by transferring his soul into the Inferna Copula, a ring with which she could control Angor Rot. The witch ordered Angor Rot to seek out and assassinate Merlin's champions.

In the second half of Part One after Bular's death, Stricklander and Otto Scaarbach, two changelings serving Gunmar, use the Inferna Copula to release Angor Rot and control him to kill the current Trollhunter, Jim Lake Jr. He sends many of his golems to fight him and sends his eye into Heartstone Trollmarket to spy on Jim's team when they were talking about finding the Triumbric Stones to destroy Gunmar.

In another encounter, Angor puts a curse on Jim which gives him control of the Sword of Daylight and steals the Killstone, wounding AAARRRGGHH!!! with his Creeper Sun Blade and slowly turning him into stone. During this fight, Claire steals Angor's Shadow Staff. Stricklander, to protect himself from Jim, asks Angor Rot for a spell to unite his and Jim's mother Barbara fates.

Fed up with Stricklander, he proposes a deal to Jim, in which Jim would get the Inferna Copula for him, and in exchange, Angor would break the spell. Jim uses the Kairosect to stop time and takes the Inferna Copula from Stricklander, but in the way, he also retrieves the Killstone from Angor, and then attempts to use the ring against Angor just to get in a fight with him.

Angor, trying to kill Jim with the Sword of Daylight, accidentally destroys the ring, thus losing his soul. With nothing to hold him back, he tries to kill Jim, but he escapes. Later, he tries to kill Stricklander, but he also manages to escape and finds Jim to beg him for help.

Jim and Stricklander try to defend Jim's house while his mom, Barbara Lake, was working all weekend, but Angor's eye spies on them. When they realize this, they trap it on a glass. Shortly after, Barbara unexpectedly arrives, and so does Angor Rot. Jim and Stricklander trap him and almost kill him with ultraviolet lights, but Barbara accidentally frees him and wounds Stricklander, as well as wounding herself. The three of them are chased by Angor, but manage to arrive at Heartstone Trollmarket.

Following this, he attacks Toby and Claire when they go to school to find Stricklander's book to save Barbara. Claire sends the book's page through a portal using the Shadow Staff, but Angor steals her purse to get the Horngazel, the key to Heartstone Trollmarket.

After Vendel saves Stricklander and Barbara, as well as also erasing her memory, the trolls prepare for Angor's arrival. Stricklander gives Jim the last Triumbric Stone and leaves to an unknown location. When Angor arrives with an army of Golems, he tries to kill Toby with his Sun Blade, but AAARRRGGHH!!! gets in the way, saving Toby and turning into stone. Angor then chases Jim to the Hero's Forge where Angor locks both of them inside. In the fight, Angor quickly gains the upper hand, and when he is about to kill Jim with his Sun Blade, Claire sends Toby through a portal distracting Angor. Then, Jim kicks Angor's arm, making him stab himself in the chest when he turns into stone, and Toby uses his Warhammer to destroy him, releasing the souls of the Trollhunters that Angor had killed.

At the end of Part 2, Claire Nuñez is corrupted by the Shadow Staff. She finds Angor's head and takes it to Morgana, the latter of whom intends to free herself from her prison.

Morgana gives Angor’s head to Gunmarso he can get his eye. While getting the eye, Gunmar says that he will rise again. After Jim frees Claire from being possessed by Morgana, Gunmar comes to the Temple of Ahsa-Thoon, where he meets Morgana, who revives Angor, who vows revenge. When Claire accidentally goes to the Shadow Realm, Angor tells her to tell Jim he is coming for him. Gunmar, a brainwashed Draal, and Angor go to Merlin’s tomb to get the Staff of Avalon. Due to the fact that magic is restricted there, Draal ends up being free. Gunmar tries to chain him up until Angor interferes, as he remembers the line Gunmar said was once said by Stricklander. When the Trollhunter sees the timeline, Angor Rot appears behind them and they flee. Angor Rot is stopped by the blades, and when he gets free, he and Gunmar chase Jim and the gang. Angor tries to kill Jim and Draal but fails. When they both go to the top, Gunmar injures Draal, and when Angor comes up, he impales Drall with his blade, turning him to stone and causing him to fall to his death. When Gunmars leaves, Angor asks for help, but Gunmar ignores him and leaves him to die.

Angor manages to climb back up, and seeks revenge on Gunmar. Morgana then speaks with him, saying that that he is his champion, but if he fails, she will kill him.

Angor and Gunmar end up capturing Barbara and Stricklander, and Gunmar tells Stricklander that he will free her if he frees Morgana. Queen Usurna comes in with a glamour mask, disguised as her, and tells him to do whatever he says. However, Stricklander manages to know it is Usurna because the real Barbara always called him Walt. When Barbara ends up being freed from the cage, Angor holds her as Stricklander says the incantation. However, Stricklander uses the magic on Gunmar and Angor, and he flees with Barbara. Gunmar orders his Gumm-Gumms to go after them and redirects the magic to Morgana, freeing her.

While Angor trains at the Forge, Gunmar announces Morgana’s presence. While Angor sees the announcement, Morgana says that she will need some sacrifices, as Gunmar and Angor see in horror that most of the Gumm-Gumms are killed.

While Gunmar celebrates that they will have the entire human race extinct, Angor watches it from the balcony. Morgana asks Angor if he is enjoying that his race will be winning, which Angor asks. Morgana reveals to him that Gunmar is a pawn and will be disposed of and he is his champion although, in reality, Gunmar, Angor, and the whole army are pawns, which Morgana never tells him.

When Gunmar and Jim face each other in battle, Angor comes in to help Gunmar kill Jim. As the fight starts, Jim ends up reminding Angor about his past. As Angor sees what he has become, a frustrated Gunmar calls him weak and throws him. After Jim slays Gunmar and tries to fight Morgana at the bridge, Angor comes in. Morgana presents him with the honor of killing the hunter, but instead, Angor punches Morgana for everything he did. The two engage in a swift yet intense battle. Angor holds Morgana and Jim tries to kill Morgana by impaling her with and eclipse blade. Angor congratulates Jim for the idea, though he was also impaled, Morgana smashes the blade as she can’t be killed by it. During his final moments, Angor tries to help the team drag Morgana to the Shadow Realm, but Morgana obliterates him.

It is shown that Angor discovered Morgana's dead body after sailing across water. Feeling sorry for her demise, he takes her onto his boat and out of the water before dropping it off at the shore, and says that he hopes that she will pass on to the afterlife.

Angor Rot is a fearsome, murderous, violent, diabolical, and sadistic troll assassin who takes great joy in the casual hunting and killing of his victims. He especially enjoys playing a deadly game of cat-and-mouse with his prey. He is also described as unpredictable by Vendel, as he can strike at any time or start manipulating his prey. He is also very cunning, intelligent, and manipulative, using his brains and booby traps to his advantage, rather than using brawn. He initially used to be a caring individual who wished only to protect his people and his land ever since Gunmar and his army attacked and probably destroyed his land.

This led him to his deal with the Pale Lady (Morgana), and his powers. However, after being tricked into giving up his soul in exchange for his wizardry, any sympathetic side of him outright died off, as it consequently turned him into an unpleasant, heartless, bloodthirsty, ruthless, brutal, treacherous, and destructive monster who has caused numerous destruction and chaos throughout his time, even killing some past Trollhunters as well. After being released from his imprisonment by Stricklander, he is noticeably calmer, patient, and stoic, almost playing with Stricklander and his fear of being killed by the Trollhunters, even after he was forced to work for him after Stricklander wore the Inferna Copula, where his soul is stored. His attempts, just to name a few, include, him sending out Pixies to bring out Stricklander's fear of Bular and his revenge for allowing Gunmar to "rot in the Darklands".

Another example is when he calmly threatens to cut off his finger after he states that as long as he wears the ring, he can always control him: "But how long will that finger be on your hand?" After he accidentally destroys his own soul, he becomes more soulless, uncontrollable, barbaric, vicious, obstreperous, temperamental, deranged, vengeful, and especially psychotic to all he meets, as he attempted to kill Stricklander in a fit of animalistic rage; at the same time, he vowed that after he kills him, he will then kill Jim and "everybody else". When asked if he is insane, he states, in an unstable fashion, "I'm free!" The only thing that does remain is his cunning, unpredictability, and sadism, as he gleefully stated that the only reason that Jim is still alive is that he let his loved ones fall in his place and that because of this, he let AAARRRGGHH!!! die. He is also shown to be arrogant, boastful, and prideful, as he bragged to Jim, "where are your loved ones now?", only to end up killed seconds later.

In the third season, when he was revived, he noticeably lost a large amount of his cruelty, yet still retained sadistic, manipulative, and destructive regardless. He silently questioned his role as Morgana's "champion", and was outright horrified when Morgana killed most of Gunmar's troops for the Eternal Night. He also convicted Gunmar to let Draal live upon seeing him being called a dog, which made him reflect on his enslavement by Stricklander.

While battling the now hybrid human-troll, Jim, the latter reminded Angor that he was a great warrior and hero and told him what his purpose was now that he was revived, causing Angor to remember what really happened to him. Upon realizing who he really is, Angor betrays Morgana and sacrifices himself to make sure she was defeated for good. 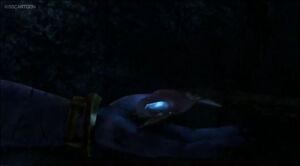 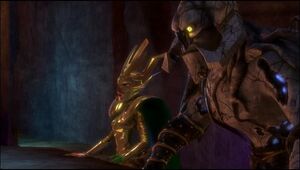 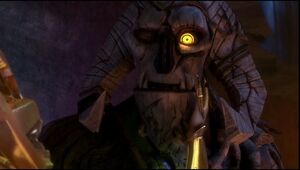 Angor being manipulated by Morgana.