Reduce the universe back to nothingness.

Angra Mainyu, also known as Aŋra Mainiiu and his Middle Persian name of "Ahriman", is one of two central deities in Zoroastrianism. He is the powerful god of evil, destruction, and darkness, and the brother of the benevolent Zoroastrian god Ahura Mazda, who created the universe. He is often seen as the Zoroastrian equivalent of Satan/The Devil and the Antichrist but unlike the two, he is not a creation of Ahura Mazda and is instead the Anti-God. He is also said to be the personification of the negative moral concept called the Druj ("The Lie" or "Lie", from an old feminine word in the old Avestan language meaning "falsehood"), a terrible energy that "designates" all beings to choose chaos over its ethical opposite called the asha ("Truth").

In the beginning of time, when Ahura Mazda created all of the good things in the universe, Angra Mainyu, out of jealous spite, sent demons to spoil all of creation. Ahura Mazda welcomed his brother benevolently and with words of peace, but Angra Mainyu spurned him, and so Ahura Mazda cast the evil destroyer back into the darkness from whence he came. Ahura Mazda then said "Neither our thoughts, teachings, plans, beliefs, words, nor souls agree.".

After Gayomart, the first human was created, Angra Mainyu, banished to the outer darkness by prayer, attacked creation and spoiled the paradise with starvation, famine, lust, disease, sickness, suffering, and death, defiled everything he touched with rejoice. He then shouts in victory, "I have fouled the world with filth and darkness, and made it my stronghold. I have dried up the earth, so that the plants and animals will die, and poisoned Gayomart, so he will die.".

This infuriated Ahura Mazda, who imprisoned his brother in the Absolute Darkness, from which he could not escape to continue his spoil upon the world. However, the unholy god did not concede and lured the first human couple, Mashya and Mashyana, into evil. This forced Ahura Mazda into making them mortal. Angra Mainyu seduces people into wickedness.

During Frashokereti, the Iranian end of the world, Ahura Mazda will bring prepare to destroy Angra Mainyu. However, after the humans are no longer enticed by sin and self-indulgence, Angra Mainyu will be pursued by Az, Ahriman's female counterpart. He will beg to Ahura Mazda for mercy. Ahura Mazda will cast the wicked god from creation through the abyss from where he first came from, never to be seen again.

Angra Mainyu rules over the Daeva. He has numerous assistants who help him fulfill his role as Evil Spirit. The main ones are Akoman (Evil Mind), Indra Vayu (Death), Saurva (Disease), Aeshma (Violence and Fury), Az (Lust, Greed, and Jealousy), Mithandruj (Dishonesty and Lies), and Taurvi and Zairicha, also known as Tauru and Zairi (Fever and Thirst). 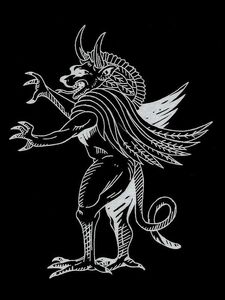