Make everybody angry (succeeded, but then backfired).

The Angry Eyebrows are created by Awful Alvin to make people around Bumblyburg angry. The abilities of those monsters are sticking on people's forehead once that person is angry and their psyche will gradually corrode as they remain trapped inside their own most excruciating sentiments for all eternity. For instance, a commoner was disgraced by what her friend did by complete accident, and upon absorbing one of these eyebrows, was driven into a psychotic vindictive obsession, and while she was never seen taking this out on her children, it should be noted two more angry eyebrows had already found them. One eyebrow was far larger than the others, and he captured LarryBoy after he confirmed he did not fear its maker. It proceeded to take a truck full of chocolate syrup and empty it into the Larry-mobile after Awful Alvin failed to provoke LarryBoy himself. This act of vandalism proved effective, and LarryBoy subsequently became one of the victims, reduced to being hardly able to form coherent words. Fortunately, he recalled the sagelike words of his mentor, Bok Choy, and was able to bring his temper under control. Without him holding on to anger, the eyebrow saw no reason to remain and went away. This encouraged everyone else to abandon their rage as well, and Awful Alvin subsequently ordered all of the freshly disjointed eyebrows to murder LarryBoy in cold blood. Making for the roof of The Daily Bumble, LarryBoy feigned with his cape and made all of these monsters go in a hat machine invented by Ma Mushroom, where they all forcibly fused and became one big hat. Seeing how this infuriated Alvin, the hat, being no less attracted to anger, trapped its maker soundly, leading to his arrest. The hat's fate is unknown but it was likely disposed of discreetly.

The physiology of the Angry Eyebrows is likely based on those of bats. They look like flying eyebrows with two small red eyes.

The Angry Eyebrows are mindless parasitic monsters and all they want is to find a host and stick on his forehead to partially eradicate their free will to wallow in their worst sentiments for all eternity. 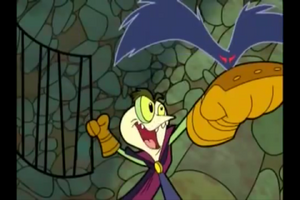 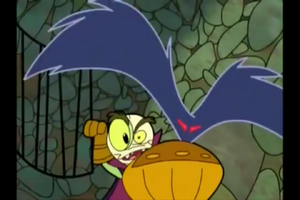 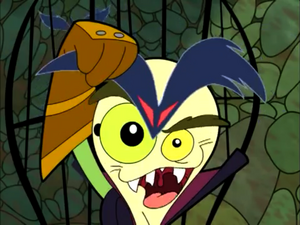