Tormenting his Lil 'Sis.
Bullying his friend Specky.
Listening to music.
Playing in the bathroom.
Messing with his dad.
Causing chaos.

Mentally III Juvenile Delinquent
Angry Kid, is the titular main antagonist of the Aardman animated adult series of the same name. He is Dad's and Mum's eldest son, Lil' Sis' older brother, He is a redheaded boy He is a mean brat who gains great enjoyment out of irritating and enraging others.

Stanners is mostly seen in his father's car, at school, at home, or riding his bike. The mean things he has done is teasing Lil Sis, swearing or picking on Speccy and fed him peanuts even though Speccy had a peanut allergy. Some of his deeds have even gone as far as to be labelled criminal, such as accusing his own father of kidnapping him, running through the streets tossing lit fireworks and bashing Speccy's head with a hammer, which nearly killed him.

Stanners is shown to be a rude, obnoxious, foul-mouthed, argumentative and mendacious person who enjoys provoking his dad's temper, and being mean to his younger sister. While he does occasionally show a remorseful side, this is mostly a gutless attempt to keep his victims from telling on him. His dad may have been the reason for Stanners' behavior and his wife's leaving due to his alcohol addiction, abuse and neglect.

Stanners wears a white buttoned shirt, a black parka jacket, blue jeans, and sneakers. He has no visible eyebrows, and has a bizarre ginger hairstyle. 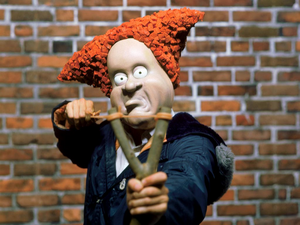 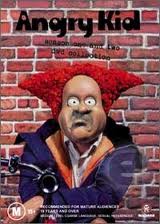 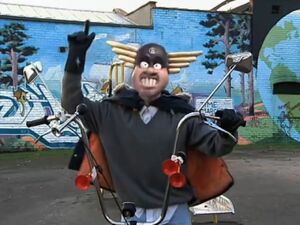 Stanners about to be sick.