Attacking those who disturb him

Wrathful Game Boss
The Angry Penguin is the final antagonist of the flash game Fancy Pants. He is a sleeping penguin who becomes very aggressive upon being rudely awakened and attempts to kill Fancy Pants Man, but is defeated and presumably killed.

The Angry Penguin is not encountered until Fancy Pants Man beats level three, where he jumps in the penguin's hole. Upon landing on the sleeping penguin, he wakes up and turns hostile. He uses his flippers as horns in order to charge into Fancy Pants, but Fancy Pants tricks him into running into a wall, jumps out of the way at the last second, and the penguin gets stuck.

Fancy Pants then jumps on him and he tries again. After being stomped on two more times, he will fall on his side, defeated. It is unknown if he died from the encounter, since he does not fall off the screen like most defeated enemies. However, x's can be seen in his eyes, seemingly confirming his death. 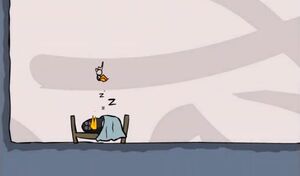 The Angry Penguin about to be woken up by Fancy Pants Man. 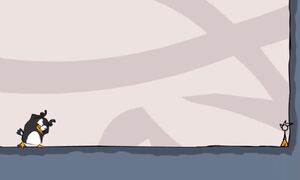 The penguin preparing to charge at Fancy Pants, not knowing he is being tricked into running into the wall. 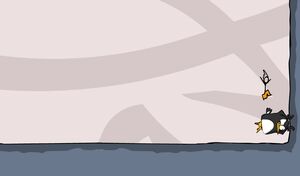 Fancy Pants about to stomp the penguin. 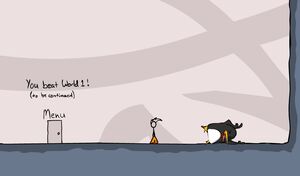