Agility
Immunity to being jumped on or slid into

The Angry Rabbit is the main antagonist of the flash game Fancy Pants 2. He is a petty thief who steals Fancy Pants Man's ice cream and attempts to escape Fancy Pants' wrath, but is confronted, defeated, and presumably killed in the end.

The Angry Rabbit first appears at the beginning of the game, where upon seeing Fancy Pants Man being awarded an ice cream cone by the mayor, jumps up, steals it, and retreats into his hole. Fancy pants man endures six different levels, each with a different terrain, before finally confronting the petty thief in his lair.

It is unknown if the rabbit died from the encounter, since he does not fall off the screen like most defeated enemies. However, x's can be seen in his eyes, seemingly confirming his death. 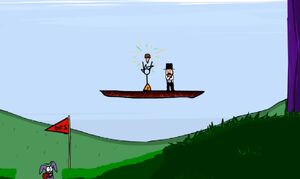 The Angry Rabbit about emerges from his hole, about to steal Fancy Pants Man's ice cream cone. 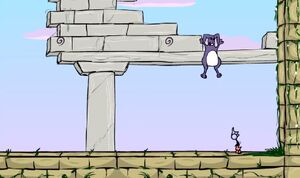 The rabbit attempting to jump on fancy pants man. 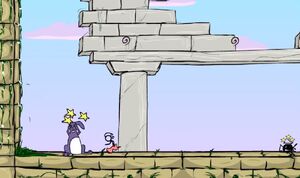 The rabbit stunned and about to be kicked at full force. 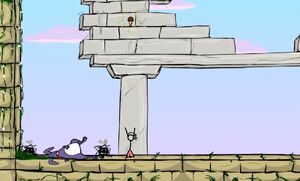 The Angry Rabbit is defeated and the ice cream has been reclaimed.
Add a photo to this gallery

Retrieved from "https://villains.fandom.com/wiki/Angry_Rabbit?oldid=4032933"
Community content is available under CC-BY-SA unless otherwise noted.