Head of A&R at Empire (formerly)

Getting rid of Laura & being with Hakeem (failed).

Killing Rhonda and her baby (succeeded).
Steal Empire & Bella from the Lyons (failed).

Anika Calhoun is an antagonist of the FOX musical/drama, Empire. She is an associate of Empire Records and ex-wife of Lucious Lyon and mother of Bella Lyon.

She was portrayed by Grace Gealey.

A debutante hailing from New Orleans, Louisiana, Anika is the daughter of Dr. Stanley D. Calhoun and his wife Claire Marie. She earned a Bachelor's degree in political science from Loyola University Chicago in 2000, and later an MBA from Harvard Business School in 2006. By 2009, she was already dating Lucious Lyon and worked as the head of A&R at Empire Entertainment.  Personally appointed by Lucious Lyon for her unique ear and artistic sensibility, Anika helped launch the careers of artists on the Empire label. In one episode, Anika punched Andre's wife Rhonda down a flight of stairs, however she survives but her pregnancy didn't. Rhonda remebered that the culprit was wearing red and black high heel when she pushed her. Rhonda recognizes the heels Anika wore, revealing her to be the culprit. Anika says she did it so that her baby can be born instead of Rhonda's.

Later Anika and Rhonda fought on a bridge and she throws Rhonda of the bridge to her death, much to Andre's horror. On account of Lucious injures after nearly getting killed in a car bombing caused by Andre, Anika tried to take Empire all to herself.

During a speech at Empire, Andre Lyon drugged her causing her to see hallucinations of Rhonda. Anika trying to escape, but fake Rhonda keeps following. She pops up from behind her with dark demonic eyes and says "Karma's a bitch", which terrifies Anika. She accidentally falls of the balcony, lands on a champán dining table and bleeds to death. Since Rhonda was killed at the hands of Anika, she suffers the same death as Rhonda's. 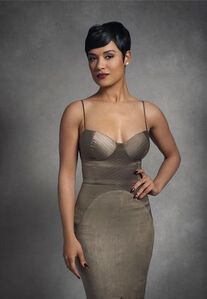 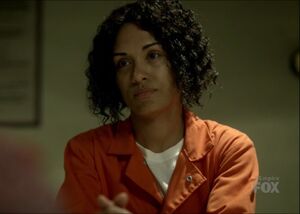 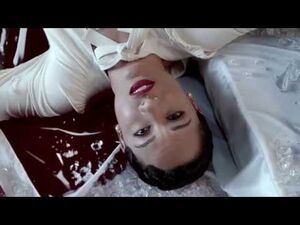 Anika's death.
Add a photo to this gallery
Retrieved from "https://villains.fandom.com/wiki/Anika_Calhoun?oldid=3911757"
Community content is available under CC-BY-SA unless otherwise noted.