Expertise at butchering others

Expertise at torturing others
Charisma

Cook the men as pigs.
Use the women for milk as cows.
Kill the baby.
Kill the woman which does not make milk.
Kill Alec with a rock.
Capture and cook Nora and Ashley (all succeeded).

Animal Masked People are villains from the 2018 horror film The Farm. The Landlord is their boss, which commands the animal masked people what to do.

A couple, Nora and Alec are going on a trip, while they are going though countryside. Nora ends up telling Alec that she needs to take a pee, which she does outside in the middle of nowhere, and she ends up finding someone's wallet and cellphone. After of which it's revealed that a human skull is inside of grass, hidden. Nora ends up telling Alec about the missing items, and Alec thinks that just someone throw them away since they aren't needed to them anymore. Later on, they find a old lady and her car died. Alec wants to help the lady, which she accepts. Alec goes onto helping the lady, and the lady starts asking Nora if they are married. Nora gets a bit stressed, trying to change to topic, which escalates in the woman insulting the couple. Alec could not find the reason of the broken car, and they leave the woman with her broken vehicle.

Later on, the couple goes into a restaurant to eat, in which they ordered to eat burgers, and drink coffee & water. Alec ended up seeing a male constantly staring at the couple, which escalates in the couple leaving the restaurant. Alec gets very suspicions about the man staring, while Nora thinks that he is just a weirdo, which escalates in the man jumping at Nora telling her and Alec that they aren't safe here. They look at him weirdly and leave the restaurant. As they keep driving, they end up filing their car at a gas-station. Alec ends up asking the cashier where could they stay to rest, and the cashier tells them go to the location of rental cabins, which owns the Landlord. As they went to the location, Nora gets disturbed by the place, thinking that its empty, until the Landlord sees them and talks to them, which kindly greets them into the house, and asking them if they are looking for a room, which escalates in the Landlord bringing them to a cabin. Landlord starts talking to them, and Nora asks him to leave since they are very tired. Landlord slams the door, and Alec and Nora talk to each other about the Landlord.

When the night came, they went to sleep. Once they fall asleep, a man with a sheep mask has been laying under their bed, waiting for them to fall asleep, which climbs from the bed, and stares at the couple sleeping. The next day, Nora wakes up seeing her self in a cage, and she stars panicking trying to get out from the cage, and yells for Alec. A man with a goat mask starts to thump on her cage to make her become silent, and disappears. Nora then took a rock, trying to break the cage, to unlock her self until the goat masked man came with a cow masked man, which ends up putting canister all over Nora's head. She ends up waking up to being strapped up to a chair with her legs parted. A rabbit masked vet appears and ends up inseminating her with a injection inside of her. Back inside of her cage, Nora is pulled on a cart, and she sees masked men and women doing stuff, one of which is butchering a males' corpse, and she gets locked up in a stable.

Alec then wakes up himself inside of a cage as well, fully naked and gagged. Although he is not alone, around him other men inside of cages are next to him as well. Alec starts screaming for help rapidly, until a masked men came and start bashing two men in cages with a hammer, while their necks are held by a control pole. Alec tries resisting opening the cage, but gets hit by the hammer as well. Alec being unconscious body along the two other men are being brought to a slaughterhouse. It's revealed that the men are being captured and slaughtered for meat, and that the women are raised for mil. The men's meat is used for weddings and similar services. Landlord ends up ordering more meat. Landlord starts reviewing his production rates, as she turns his attention to a woman with a baby. The Landlord takes the baby and measures it's weight, until one of the masked people smashed the baby on the ground, and taking the body away. The mother starts screaming and crying rapidly for her lost baby. Then it's revealed that that the cashier is a slow-minded man known as Andrew, starts to console her, and the woman starts calling Andrew sick, and Andrew furiously ends up killing the woman. Landlord finds out that the woman was killed, and he orders the Animal Masked People to find Andrew.

Nora hears a woman next to her, finding out that she is being milked by a machine. Nora confused asks what is happening, and the woman says that she shouldn't know what is going on and that there is no escape out from here. Nora hears another woman by the name Ashley talking to her as well, Nora tells Ashley that they will escape. One of the masked man finds Andrew in a slaughterhouse, playing around with human heads which are decapitated. Andrew begs and tells them that its not his fault, as he gets dragged to the Landlord, which tells Andrew that he should not leave his gas station position and that he should stop playing with his food. Andrew ends up getting supervised by one of the masked people, and gets Andrew to feed the caged men. Andrew tips the food, and Andrew runs in fear because of his punishment. Andrew takes oregano and runs to the Landlord, which accepts it and tells the masked man to take care of the women which is not able to make milk anymore. Nora then watches and stares at the woman being slaughtered. Alec then full of blood appears which apparently survived. Both of them end up escaping trying to avoid the masked people. They end up going to a truck, and try to turn it on but failed. After of which they entered a church, as the image of Jesus and his followers are changed with animals. A cow-masked man enters the church, praying. The couple tries to escape, but the cow-masked man hears them following them. As they run, another masked man appears and follow them. Alec then ends up getting caught up in a bear trap, and Nora tries to help, but runs away because of the masked people being too close to them. The masked people stare at Alec, smashing his head with a rock.

Nora ends up entering the male barn, asking how to escape, while the Landlord and Andrew came in. One of the captured men tells her to hide and tells her about a bus and keys which she should take in order to escape. Nora starts running to a place where cars are parked, one of the masked people is turned around, and she ends up bashing the masked mans head with a hammer. The masked people saw her and run towards her. Nora gets in a car, and starts driving. She drives until she is out of gas. She is being then chased, a she gets out from the car, and goes to free Ashley. She frees Ashley and they went to the bus but have no keys. Nora ends up finding the keys, she took the keys starting the bus until Ashley froze staring at numerous masked people sitting in the bus waiting for them, having expected their arrival if they escaped. In the end of the movie, Nora and Ashley get prepared to get eaten by the Animal Masked People, which are roasted like pigs, with apples inside of their mouths while the animals are recreating the Leonardo Da Vinci's photo The Last Supper of Jesus Christ. 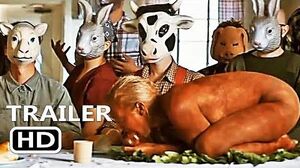 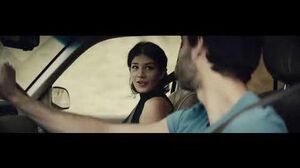