Control over the motion of his animations.

The Animator is the titular main protagonist of the Bored Animator series. He is an animator that draws innocent creations, then tries to destroy them through elaborate deathtraps and weaponry.

Angry, the animator draws a new animation, this one at the bottom of two hills with spiked carts coming down them, where it cannot escape. The animator commands them to roll and defeat this animation.

However, he is interrupted when his first animation arrives, who escaped the weights and also made it to the real world. The first animation fights him off with a toothpick spear, then escapes. The animator attempts to draw a gun to finish the animations off, but the two animations from the second episode also arrive, having escaped their respective deathtraps and into the real world as well. They attack his computer, breaking it and stopping his animating. The first animation arrives with another spear and fights back again.

Angered, the animator picks up his keyboard and attempts to smash his creations with it. However, the animations join together as one and electrocute the animator, who stops moving. The animation then escapes into the animator's PlayStation 4, where it can live peacefully. It is unknown if the animator was killed by the shock, just immobilized, or surrendered. 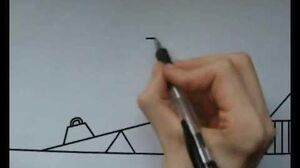 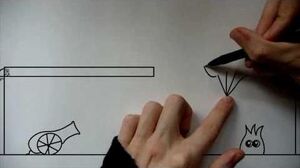 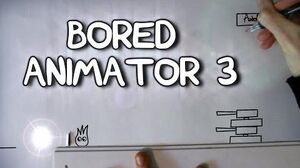