Depends on the type, but includes:

Wandering through the pizzerias.
Attacking or killing the night guard.

As their name suggests, they are robotic animals or humanoids created by Fazbear Entertainment and Afton Robotics to entertain children at pizzerias and fast-food restaurants. Most of the animatronics, particularly the classic ones, are haunted by the ghosts of children murdered and stuffed into the mascot suits by the serial killer William Afton. In their pursuit of vengeance against him, they became extremely aggressive towards adults, outright attacking those still at the pizzeria after nightfall with intent to kill. William himself would eventually share their fate, only to become something far worse than his victims.

At this point in the series' timeline, the majority of the animatronics have been destroyed and absorbed into the Blob underneath Freddy Fazbear's Mega PizzaPlex, whilst Afton remains alive despite people's best efforts to destroy him. Otherwise, most of the currently active animatronics are either stationed at the aforementioned Freddy Fazbear Mega PizzaPlex or are duplicates of the original animatronics created by the Fazbear Funtime Service.

The second animatronics to be made, these have basic designs, exoskeletons made out of plastic with a furry texture, and very few enhancements. Excluding the Puppet, they were also known as Withered animatronics when they fell into disrepair after the first Freddy Fazbear's was closed. The Withered ones were eventually repaired and reused for another Freddy's, but left to rot when that restaurant also shut down. Thirty years later, their parts and suits were found and used as props for the Fazbear's Fright horror attraction after being destroyed by William Afton. The few props that survived when Fazbear's Fright burned down were sold on an auction. The Puppet, meanwhile, got captured by Lefty and incinerated alongside Springtrap and the Funtime animatronics. All five of the animatronics are possessed by William's victims, seeking to avenge their deaths.

The first animatronics created by Henry Emily and William Afton, these animatronics have springlocks that clamp the endoskeleton parts to the sides of the costume, allowing them to be worn by performers. Actually using them as suits was very dangerous however, since the springlocks were very sensitive and could by easily set off, causing the parts to snap back into place and mutilate or even kill its wearer. They were mainly used in Fredbear's Family Diner, before an accident made them be deemed too dangerous and were discontinued. While the fate of the Fredbear suits remains unknown, one of the Spring Bonnie suits eventually claimed Afton as a victim, but the man possessed the robot and became Springtrap, before a fire transformed him into Scraptrap and later Burntrap.

Mysterious ghosts which are connected to things like Remnant, agony and rage, and possibly other things. While Shadow Bonnie's morality is ambiguous given how he committed both good and evil acts, Shadow Freddy is actively malicious.

These animatronics were created to replace the classic animatronics when Freddy Fazbear's Pizza had its grand reopening, but have more cutesy and cartoonish designs and suits made completely out of plastic. They also have built-in criminal detection software linked to a criminal database, allowing them to detect felons such as William Afton. The Toy animatronics were scrapped when one of them bit a customer and the pizzeria had to close down again after a few weeks. It is unknown if the Toy animatronics are possessed or not.

These animatronics are ghostly hallucinations who lurk the halls of "Fazbear's Fright: The Horror Attraction", able to cause malfunctions to the equipment in the building. Their fate remains unknown after Fazbear's Fright burned down, but they weren't seen again so it can be presumed they disappeared. While they are treated as hallucinations in-game, some fans speculate that they are souls after leaving their bodies or something else entirely.

These animatronic are monstrous and terrifying, featuring protruding wires, cracked and broken suits and multiple rows of sharp teeth. Although some details hint at them being something more sinister, they are widely considered to be just what their name suggests, nightmares haunting the dreams of the unnamed protagonist, most likely Michael Afton. Assuming this is true, they aren't real. Jack-O-Bonnie, Jack-O-Chica, Nightmarionne and Nightmare Mangle are special cases, seeing as they weren't haunting any dreams; They are literal video game characters in-universe. Another one of the animatronics, Nightmare, is connected to Shadow Freddy, which might mean he's more sinister than everyone else.

These animatronics were the stars of Circus Baby's Entertainment & Rental, created by Afton Robotics, LLC. They are clown-like robots which have opening faceplates, wire endoskeletons, and are made out of metal. They were specifically built and programmed to kill and abduct children for William. The first four gained a degree of sentience and escaped the underground facility with the "help" of Afton's son, Michael, as Ennard. Those four robots were eventually lured into a trap and destroyed alongside their creator. Circus Baby is possessed by Elizabeth Afton, William's daughter, but it's unknown if the others are possessed as well. Bonnet is a literal video game character in-universe, like some of the previously mentioned Nightmare animatronics.

These animatronics are presumably cheap bootlegs of Fazbear Entertainment's animatronics. They are made out of colored plastic and require car batteries connected by cables to be powered.

Animatronics made in the image of the classics, these animatronics have sleeker proportions and plastic suits instead of, designed to look like rock stars, hence the name. Like the Mediocre Melodies and Trash and the Gang, they are purchasable items in Freddy Fazbear's Pizzeria Simulator, but take on antagonistic roles in Ultimate Custom Night. Lefty was created to capture the Puppet inside himself, while some scrapped information from Five Nights at Freddy's AR: Special Delivery reveals that the remaining four were created out of the remains of the Classics.

Similarly to the Nightmare animatronics, these animatronics are supernatural and nightmarish in appearance, as well as organic features and growths all over their bodies. The Twisted Ones each have sharp claws and stomach containers that allow them to kidnap even adults. Also created and used as servants by William Afton, they use illusion discs to give themselves their appearances and abilities. They only appear in the Novel Trilogy, and therefore all of them are non-canon to the game continuity.

The most advanced animatronics so far, they are the main stars of Freddy Fazbear's Mega PizzaPlex. One of them, Glamrock Freddy, is a heroic character helping the child Gregory. However, the others have been hacked and are out to kill the child.

As part of the Fazbear Funtime Service, some of the mass-produced animatronics got skins that serve no purpose. 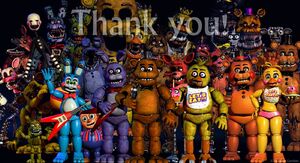 Almost every animatronic up until Five Nights at Freddy's 4 in the 'Thank You' image. 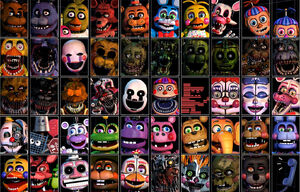 Most of the animatronics in Ultimate Custom Night.

Every animatrnoic provided by the Fazbear Funtime Service (including Shadow Bonnie), up until December 2021.