Raise Woody to be a "good Christian".

Anita Johnson is a recurring antagonist in Brickleberry. She is the abusive, bigoted mother of Woody Johnson, who assaulted all throughout his childhood and still strikes fear in him even as an adult. Woody despises her so much, he liked to claim she was dead until the truth came out when she first appeared in person in "That Brother's My Father". She is villainous for violently abusing her son both physically and psychologically as well as her shameless bigotry, racism, homophobia, and all other forms of hateful intolerance.

She was voiced by Janell Cox.

Anita Johnson married a relatively unknown man named Harry Johnson, who bore with her one child named Woody Johnson. They were both extremely abusive and hateful to their son. One day, Harry left the family entirely for unclear reasons relating to Anita. Anita was so upset about the divorce that she became even more abusive to Woody because of it and even blamed the divorce on him.

Anita was an alcoholic, who let her addiction get the best of her and fuel her abuse toward her son. For a long time during Woody's early childhood, Anita would have him locked in a crappy old closet full of spider webs and dead rats. She would occasionally stick her breasts through a hole in the wall and breastfeed him through it.

One day, Anita's sister, Mavis Crawford, came by and noticed what a mess Anita's life was. She knew that she was woefully unfit to be a parent and that her son didn't deserve such a horrible life. However, she still had faith that her sister could change for the better. Mavis tricked Anita into going to rehab, while she took custody of Woody and temporarily raised him, alongside her son, Randall Crawford, who became his best friend and made his life very happy during his visit.

When Anita got out of rehab, despite her sobriety, she was still the same vile and disgusting woman she was when she went in. Mavis knew it would not be fair to send Woody back to live with her and instead just decided to adopt Woody for herself. However, when Randall heard that he'd be sharing a mother, he got jealous and beat himself up with a video game system and then blamed it on Woody, tricking Mavis into thinking that Woody was a horrible person, just like him mom. Mavis decided to cancel the adoption and sent Woody back to live with Anita, believing he deserved her but mostly, to keep her own son in safe hands.

With Woody back in her life, Anita continued to abuse him and make his life miserable. Only now, things were a lot worse for Woody because now he was suffering after getting a taste of how good his life could have been.

On Woody's eighteenth birthday, Anita ordered him to have sex with a hooker so that he wouldn't, in her words, "turn into a queer".

When Woody finally grew up and moved out of the house, Anita was sent to a retirement home. Woody wanted to completely forget everything about Anita. So, from then on, he would shut her out of his life completely and claim that his mother was dead if the conversation ever came up. Woody got a job as a chief ranger at Brickleberry National Park.

One day in the retirement home, Anita assumed her roommate was cheating at bingo and cut her feeding tube, leading to her getting promptly kicked out. After this, she called Woody at his new job at Brickleberry National Park and announced she was coming over to visit. Woody was horrified to know his mom was coming back and quickly tidied up the place upon her return. When Anita came back, she saw that everything was pretty much in place except for an undusted houseplant. Anita told Woody that his tendency to forget to dust plants is what made his father leave him. Woody cried just like he did when he was a kid and pulled his pants down, awaiting a spanking but Anita let it slide, calling this "strike one". When Anita met Malloy, she was actually extremely kind to him and would treat him with tons of love and respect and give him money and chocolate. Malloy was extremely nice to her for this reason and used her as a surrogate to not only get whatever he wanted but also to continue to make Woody's life miserable. When asked how long she'd be visiting, Anita said that because she got kicked out of her old home, she would be staying forever, much to Woody's terror and Malloy's excitement.

Anita showed embarrassing baby pictures of Woody to Steve Williams and Ethel Anderson, which pissed Woody off. When Woody began to rant about this, Anita punished him for acting up. Just then, Denzel Jackson came in and was quickly smitten with her. He started hitting on her and Anita flirtatiously fell in love back. It wasn't long at all before Denzel got married to Anita, which angered Woody into having a stroke.

Now that Denzel was legally Woody's father, he tortured Woody by making him engage in father-son activities with him. This was all as an act of revenge for Woody treating him like a slave earlier on.

Woody and Denzel got into a fight and Anita demanded that they spend time together as father and son to get along, which they did. Before long, Woody and Denzel actually started becoming good friends. They went to the bar that night and started barfighting all of the other barflies. Woody noticed it was 9:30 and said that his curfew was 9:00 but Denzel told him that he didn't need to worry about that and to just have fun with dad for the night.

When Woody and Denzel came home late that night, Anita was very upset with them. Malloy convinced Anita to throw Woody into the birds & bees closet again as punishment.

Denzel came up to a badly beaten Woody and told him that it wasn't right how Anita treated him and encouraged him to stand up to her. Woody was afraid but Denzel told him to face his fear. Woody went to Anita and told her that he didn't like being abused by her, which only angered Anita even more and got her to whip him brutally with a rusty bicycle chain. Woody ran up to his room, crying and Anita scolded Denzel for putting him up to this. She prepared to whip him with the bicycle chain too but Denzel took out a bicycle chain of his own and prepared for a battle.

After the fight, a bruised up and bloody Anita and Denzel came to Woody's room and told them they were getting a divorce. Anita blamed this on Woody too, making him cry hysterically.

The next day, Anita complained to Woody about Denzel and made a few racist remarks too. Woody got fed up with Anita's bullshit and finally stood up to her. Anita tried to punish him but Woody shattered her world, telling her that it was her fault both of her husbands left her and then grabbed her bony, wrinkly body and threw her out of the house, kicking her out for good. Malloy ran up to her begging her to stay but when Anita said that she didn't have anymore money or chocolate, Malloy immediately started showing his true colors, telling her to lick his balls as he walked away flipping her off.

It is unknown where Anita is now, due to her no longer having a place to live and this having been her final present-day appearance in the franchise, chronologically. However, one thing is for certain. She is still alive and most likely the same rotten cunt she's been since the beginning. 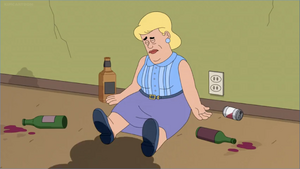 A blackout drunk Anita, when she was younger. 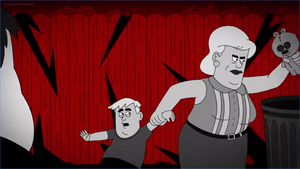 Anita taking her son Woody Johnson, back to her abusive home. 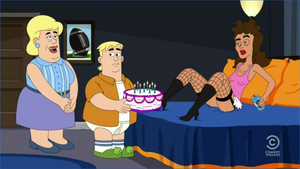 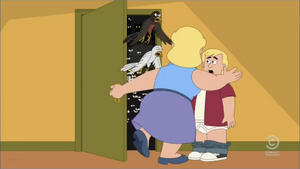 Anita teaches Woody about the birds and the bees. 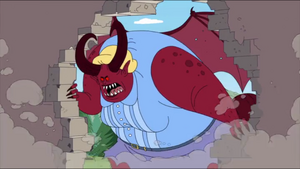 Anita as she appeared in Woody's nightmare. 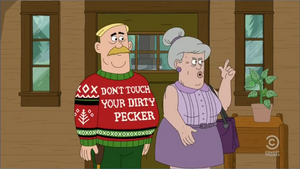 Anita returnning to Woody's life after the latter becomes an adult. 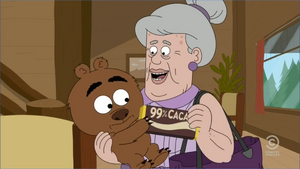 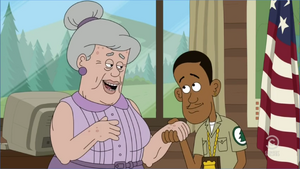 Anita meeting and falling in love with Denzel Jackson. 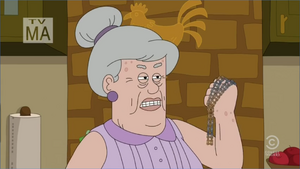 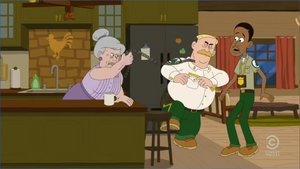 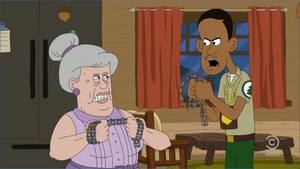 Anita getting into a bicycle chain fight with Denzel. 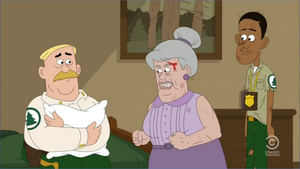 Anita announcing her divorce with Denzel and blaming it on Woody. 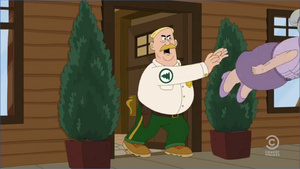 Woody throwing Anita out of the house. 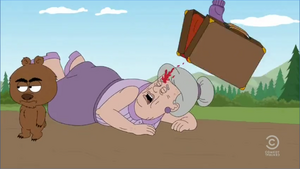