Riding and caring her horses.

Care for her horses and to strengthen her troubled relationship with her adopted daughter.

Anna Morgan is the secondary antagonist of The Ring, which was based on the 1998 Japanese horror film Ringu, but later becomes a minor, supporting character in the short horror film Rings and its sequel The Ring Two.

She is the one responsible for the murder of her adoptive daughter, who created a cursed videotape after her death, ultimately making her the true catalyst of the deadly curse. Her Japanese counterpart is Shizuko Yamamura, the psychic mother of Sadako Yamamura. She is portrayed by Shannon Cochran.

She was portrayed by Shannon Cochran.

Anna Morgan was a prize-winning horse breeder who lived on Moesko Island with her husband Richard, who was also an avid horse breeder. She often participated in horse racing competitions that occurred in the island and also took pride in caring for her horses.

However, Anna was troubled with her several miscarriages between 1963 to 1969 and often went to extreme lengths to conceive a child. It was presumed that she made a deal with demonic forces since her doctor mentions that the island was mysteriously afflicted with devastating winters ever since. In a deleted scene, some of the villagers despise Anna for "messing with nature". Eventually, Anna and Richard adopted a young girl named Samara Morgan, who was nearly drowned by her birth mother. Despite being an isolated and otherworldly girl, Anna loved her dearly and she loved her back as well.

Years passed by as Samara began to develop her supernatural abilities which enabled her to burn disturbing and gruesome images onto objects and somebody's mind. Anna began to envision these gruesome images in her mind whenever she encountered Samara, which caused their relationship to sour. She reported these images to Dr. Grasnik, who sent both her and Samara to Eola Psychiatric Hospital under 24 hour surveillance.

Anna was treated for her hallucinations and suicidal thoughts while Samara was interviewed by doctors on her ability to burn images onto objects and ones mind. The next month, both Anna and Samara were released from the hospital and Richard decided to keep Samara in the horse barn so that she would no longer trouble Anna. However, this was rendered useless as Samara also burnt gruesome images into the minds of horses, which drove them crazy. Out of madness, the horses began to panic and break free from the barn to the edge of a cliff, where they fell to their deaths.

Anna and Richard soon became the centre of unwanted attention. She was later readmitted to Eola Psychiatric Hospital and after Anna was released, the Morgan family went on a vacation to Shelter Mountain Inn. Samara stood near the well which was located in the middle of the peaceful fields of Shelter Mountain Inn, where she sung a haunting yet beautiful melody. Anna, who finally had enough of Samara, approached her from behind and suffocated her with a black garbage bag and threw her down the well (in the deleted scenes, she grabbed a nearby rock and knocked her out and slammed her head onto the side of the well before dumping her into the well).

Leaving her for dead, Anna was filled with regret over what she had done, despite knowing that she had to get rid of her or otherwise her torment will continue. Eventually, Anna decided to commit suicide by jumping off a nearby cliff.

Role in the Cursed Videotape

In the cursed videotape, it was presumed that Samara's vengeful spirit used Anna as a pawn in spreading the curse as her presence in the video compels the viewer to continue watching. She is also the only figure whose face is clearly seen, which can allude to her role of being the catalyst of the curse. Her presence is so prevalent to the point that the other characters believe that the cursed videotape was her creation. Near the beginning of the videotape, Anna is seen combing her hair in the mirror, only to have the mirror telekinetically switched to the other side by Samara, which startles her. Later, Anna is seen tying her hair and looks at the screen, although in reality, she is actually looking at Samara. Near the end of the videotape, a brief clip of her suicide is also seen. In The Ring Two, after Rachel is transported to the cursed videotape's dimension, she is able to jump off the same cliff that appeared on the tape, which was also the place where Anna committed suicide. 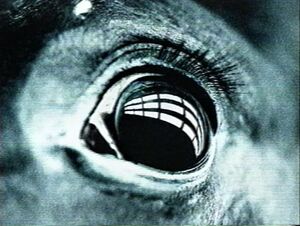 An eye of one of Anna's beloved horses, terrified by the presence of Samara. 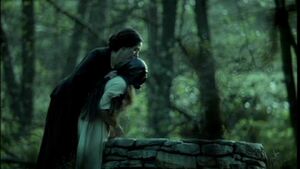 Anna, having enough of Samara's abuse towards her and her horses, decides to throw her in the well. 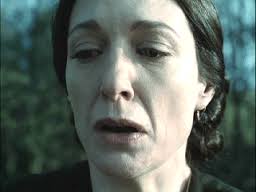 Anna is later filled with remorse over what she had done, moments before committing suicide