Live a normal life (at first and failed).

Murder her husband and partner (succeeded).

Murdering her own parents in a fire

Killed her own husband and partner

Anna Palmer is the main protagonist turned antagonist of the lifetime film Deadly Shores. She went through a very rough childhood after the death of her parents in a fire. She's married to author Richard Palmer sometime before the events of the film, who in turn simply married her for the sake of getting her money.

By the end of the film, it's revealed Anna has a psychopathic persona that loves tormenting and killing others for her pleasure, turning her into the main antagonist of the third act. She ends up incarcerated in a mental hospital, with apparently no signs of stopping her psychopathic tendencies.

Little is known about her backstory other then her parents were killed in a fire. However, she was suspected to be responsible for the death of her parents with no apparent motive.

Anna Palmer is shown alongside Richard to be moving into their new home. This home however, was owned previously by Richard and his previous wife, Grace, which Anna had no knowledge of. Also unbeknownst to Anna, Richard actually murdered Grace and is planning with his mistress, Beth, to get Anna committed so they could have access to her wealth and later leave her or have her dead alongside Grace.

Throughout the film, Anna keeps hearing cane tappings across her house and is tormented by said tappings. Anna had Mrs. Argyle over to explain the tappings but had no conclusive answer. This got the attention of Richard and called her psychiatrist, Dr. Shaw to explain her behavior. Dr. Shaw reveals that Anna's parents died in a fire and that she may have been the one responsible and implores him to pick up medication for Anna.

Richard later reveals his true colors to Anna, assaults her and locks her up alone in the tower. Unfortunately for Richard (and soon Beth), Anna's murderous side started to surface while trapped, turning what was a cry for help into demented chuckling. Mrs Argyle went inside to rescue Anna from Richard, only for Anna to strangle and nearly kill her once Argyle let her out of the tower.

Anna's psychopathic persona was in full effect at this point and proceeded to kill both Richard and Beth. However after murdering Beth, she was spotted by Carrie, a regular bartender who Anna befriended and was arrested. Anna was later seen in a mental hospital and was given her ceramic horse by an orderly. Anna told him not to be afraid of her as she wouldn't hurt a fly, all the while giving a wicked smile, implying she has no intentions of stopping her sadistic nature.

In her normal persona, she's usually ver quiet, timid and careful but also tries to make the best of her situations. She loves Richard, though she has yet to know of his true agenda, and enjoys her marriage with him. She is susceptible to some hysteria, especially when Richard gets mad.

In her psychopathic persona, she's very sadistic and clearly enjoys tormenting others as seen with Beth where she smiles evilly when she tries to run away. She's also prone to demented chuckling such as when the persona starts to surface and when Argyle approaches where she is, near laughter can be heard. 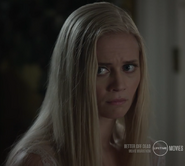 Anna's maniacal smile in her psychopathic persona
Add a photo to this gallery
Retrieved from "https://villains.fandom.com/wiki/Anna_Palmer?oldid=3363372"
Community content is available under CC-BY-SA unless otherwise noted.