Anna Walsh, also known as Anna Devost, was the main villainess from the 2016 film, When the Bough Breaks.

She was portrayed by Jaz Sinclair.

Anna Devost was born in Memphis, but she lost her parents at the age of three. She lived under the care of foster parents for 12 years, but during that time, her foster father had been sexually abusing her. At the age of 16, Anna attacked her foster father and killed him with a pair of scissors. As a result, she ended up in a psych ward, but she was released once she turned 18. After that, Anna got married at age 19, and had been going by her married name, Anna Walsh, since then. After her marriage ended, she engaged in a relationship with Mike Mitchell, a discharged military vet.

Anna was shown early in the film as a candidate to become a surrogate for Laura and John Taylor, who had failed to become parents due to Laura having three miscarriages in the past. After she and Mike met with the couple, Laura and John decided on making Anna their surrogate. Later in the film, police are called to Anna and Mike's home, with Anna accusing Mike of abusing her. After Mike is arrested, Anna moves in with Laura and John, but it is revealed that Anna and Mike were co-conspirators in a plot to scam the couple for monetary gain. However, Anna had a goal of her own: she developed a fixation with John and made subtle attempts to get his attention. This included wearing Laura's red dress at a gathering at the home, much to Laura's slight dismay. Mike later violently confronted Anna, forcing her to demand money from the couple. Not wanting to let anything get in her way of her plans with John, the evil Anna killed Mike at their home, doing so by stabbing him multiple times with a knife. She then dumped his body down the attic, and gave a devious smirk at her handiwork. Even before eliminating Mike, Anna's flirtation with John became more blatant, as she sent him a video of herself seductively removing her clothing, which gets John fired when his bosses find out about the video. Anna later causes a scene late one night, resulting in police being called, where she falsely accuses John of abusing her.

With the Taylors now knowing what Anna's capable of, John—under Laura's advisement—humors Anna's wishes to be with him, under the false claim that he's filing for divorce. However, once Anna sees John with Laura, she becomes enraged and assaulted Laura at her home, after John rushed to the hospital under a phony claim that she was giving birth. Ironically, Anna's assault was halted due to her actually going through labor. Both women were taken to the hospital, where Anna gave birth to a baby boy—intended for the Taylors—while Laura was tended to by doctors.

Anna took the baby to the lake house, where John drove with Laura in order to retrieve their son. The villainess, realizing John's presence, awoke and assaulted John, beginning a brawl that resulted in Anna being beaten and bloodied. John acquired the baby and returned to Laura, only for both of them to be encountered once more by Anna, who has a shotgun pointed at them. At that moment, Laura ran over and killed Anna with their vehicle. 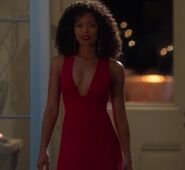 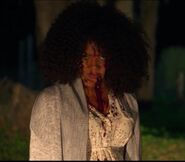 Add a photo to this gallery
Retrieved from "https://villains.fandom.com/wiki/Anna_Walsh?oldid=4146315"
Community content is available under CC-BY-SA unless otherwise noted.