NOTE: This article is about the incarnation of Anna Williams from the film Tekken: The Motion Picture. The mainstream version can be found here: Anna Williams.

Being with Lee Chaolan.

Anna Williams is a supporting antagonist in the 1998 OVA anime film, Tekken: The Motion Picture, based on the video game of the same name. She is an assassin and rival of her sister Nina Williams. She is Lee Chaolan's lover

She was voiced by Kaori Yamagata (who also voiced Elexis Sinclaire) in the Japanese dub and by Claire Hamilton in the English dub.

Little is known about Anna's background, she and her sister Nina have been enemies since they were children. It is implied that their father loved Nina better and only saw Anna as an irritating burden.

In the hotel, Lee is seen on the phone and learns that Nina has failed to kill Kazuya. Despite her failure, he gives her another chance and promises her that she’ll never to take on another dangerous job again once he’s owner of the Mishima Conglomerate. Anna gets out of the shower and joins Lee, rejoicing at her sister's failure and that she and Lee have the same problem, him with Kazuya and she with Nina.

On the island before the tournament, while Jun confronts Kazuya about their past and Nina tries to kill the latter the second time, Anna appears and tries to kill all three of them with a rocket launcher. The three manage to escape out of the room and are noticed by the guards, giving Anna and Nina the chance to run away.

The next day, Nina and Anna faced each other during the tournament. Before they fight, Anna explains that she is jealous that their father loved Nina more. The latter then accuses Anna of killing their father. While they fought, Anna takes the opportunity to reveal that Lee never loved Nina and was just using her for his own gain. As Anna continues the conversation, one of Lee’s Rex’s appears and devours Anna.

Like her video game counterpart, Anna has black hair that is in a neck length short bob like hairstyle. She wears her signature red dress, long red satin evening gloves, brown leggings, and red heels.

Like in the games, she is a cold-blooded and skilled assassin. She has a strong affection for Lee as shown when they're at the hotel, who actually was just using her. When she was a child, Anna has always been jealous of her sister due to their father preferring Nina over Anna. 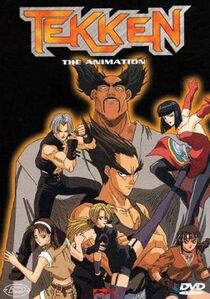