This page is about the person. For the demon possessing the doll, go here.

Get adopted (before possession).

Kill people and get back into the doll (after possession).

Annabelle Higgins (born Janice) is a major antagonist in the 2014 horror film Annabelle and the protagonist in its prequel, Annabelle: Creation, two films in The Conjuring franchise. Once an innocent orphan child, she was later possessed by Malthus, the demon inside Annabelle the Doll, turning into an insane cultist who seeks to summon demons into the world.

Annabelle Higgins was formerly known as Janice. When she was a child, she and several other orphans went to live in a new house, which was run by a kind couple who had lost their daughter Annabelle "Bee" twelve years prior. Esther Mullins reveal to the nun looking after the orphans that they tried to use supernatural forces to speak with Annabelle again, but accidentally summoned a demon Malthus who pretended to be their deceased daughter to earn their trust.

It asked permission to move into the doll and they allowed it. Eventually they realized the demon was not their daughter and they sealed it in a room with the church's help. Janice snooped around in Annabelle's old room, only to find the doll and unknowingly unleashed the demon, which possesses her and causes her to attack the other orphans and kill the couple.

She managed to escape and leave the doll, now empty, behind. Now controlled by Malthus, she calling herself "Annabelle" and made her way to another orphanage, where she was adopted by the Higgins family.

When she grew into her teenage years, she ran away to join an unknown group. Though her parents and neighbors assumed she joined with the hippies, she actually joined a satanic cult known as the Disciples of The Ram, where she fed the demon more power and even manipulated another cultist into becoming her "boyfriend".

Two years later, Annabelle returned to her home town with her boyfriend and broke into her parents' house. She and her boyfriend proceeded to murder her parents. The neighbors, Mia and John Form, heard the commotion and called for help, but the two killers crept into their house and attacked. While her boyfriend attacked and stabbed the couple, including a pregnant Mia, Annabelle locked herself in the nursery and grabbed hold of the doll she had been connected to in the past, which was conveniently there for her. The police arrived and shot the boyfriend dead, then kicked down the nursery door to find that Annabelle had taken her own life and drawn a symbol in blood on the wall beside her, still holding the doll.

Afterwards, the Forms and their child began to experience extreme paranormal activity, which Mia first assumed to be the ghost of Annabelle latched onto the doll. However, it is revealed by Father Perez that Annabelle's ghost did not exist, but that her suicide ritual had latched a powerful demon to it, one that pretended to be Annabelle's ghost and sought to devour souls (Though considering how long it had possessed "Annabelle" it might as well have been her ghost). Perez took the doll, but was attacked by the spirit, which made its way back to the Forms' apartment and kidnapped their child, demanding Mia give her soul in exchange. Mia agreed, but was stopped by her husband and friend Evelyn, who sacrificed her own soul to save Mia and her child.

Annabelle appears as a tall teenage girl with fair white skin, long curly brown hair, and dressed all in white robes. While her face is never completely seen as a teenager, it is when she is shown as a child both in photographs and in the forms taken by the demon, Malthus. 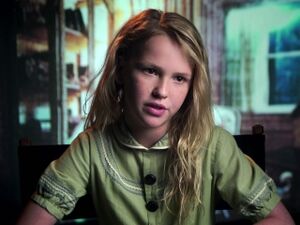 Janice before her possession. 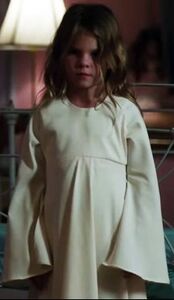 A child-like form of Janice/Annabelle taken by the demon. 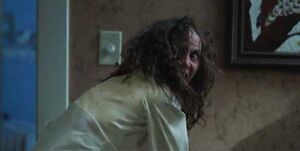 Another form of Annabelle used by the demon. 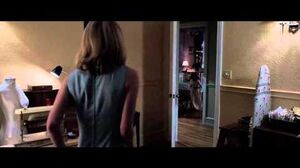