Death in the Clouds

Kill her mother and inherit her fortune

Pawn
Anne Morisot is the secondary antagonist of Dame Agatha Christie's 1935 Hercule Poirot novel, Death in the Clouds. She is an accomplise to the story's culprit in his murder of Madame Giselle, and is revealed to be the victims' estranged illegiminate daughter. However, she became the story's second victim when the culprit decided to kill her off and progressed on his goals.

She was portrayed by Jenny Downham in Agatha Christie's Poirot.

Anne Morisot was the illegiminate daughter of Madame Giselle, whom she sent to Canada twenty years ago, and later became the maid of Cecily, Lady Horbury, under the alias of Madeleine. Anne later met Norman Gale and secretly married him, in order to kill her mother and inherit her fortune as revenge for abandoning her. They got married one month before Gale plotted Madame Giselle's death.

On the day of murder, Anne went on the same flight alongside her mistress, Poirot, Gale, Jane Grey, Madame Giselle and other individuals. Her presence was accidental, and had been asked to be there till its last moments. She was later called into the rear compartment during the flight, by Lady Horbury, who broke her nail and demanded her dressing case.

During the investigation, Poirot discovered Anne's existence and called her for a visit. Anne revealed that she would inherit her mother's fortune and had married an American or Canadian husband one month ago.

Afterwards, Poirot mused that he felt that he has seen Anne before. Later, when Jane makes a remark about needing to file a nail, he realized that Anne was Lady Horbury's maid. He immediately instructs Fournier to find Anne.

However, Anne's body was discovered by French police on the boat-train to Boulogne, with a bottle beside it. It was revealed that Gale poisoned her after her visit to Poirot, faking it as a suicide case. 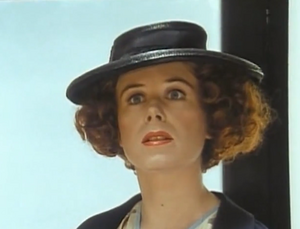 Retrieved from "https://villains.fandom.com/wiki/Anne_Morisot?oldid=3668237"
Community content is available under CC-BY-SA unless otherwise noted.