Human (possessed by a Leviathan)

Annie is the minor antagonist character from TV series Supernatural.

Annie was small teenage girl. She took small part in episode "Hello, Cruel World" in the series Supernatural. When Castiel went into public water supply, he went in water and made all souls of Leviathan free.

Very soon, Annie was taking a drink from a fountain at a park. Suddenly, Annie saw that she is drinking the black water so she stopped. But then, her head started to shake, which was the process of possession of Annie by Leviathans. She was abosuletly possessed, when she stopped to shake and put her hands off the drinking fountain. In the moment, she was thinking only about evil plans of Leviathans.

In evening, in her house, she was watching the Tv show about medicine and operations, which were provided in hospitals. She's got the interest to it. Few days later, Annie meets up with another leviathan, Edgar. She tells him that she and the others are hungry, but the Edgar is unsympathetic. Also, Annie tells him that this body is useless. She said that she can use one useful body but she would need Edgar's help.

At Sioux Falls General Hospital, Sheriff Jody Mills is recovering from an appendectomy. Her surgeon, Dr. Gaines, sees a young girl alone in one of the hospital rooms and approaches her. The girl is Annie the Leviathan, and she takes his form and then kills him.

Annie get possessed by The Leviathans

Annie meets with another Leviathan

I could use your help! 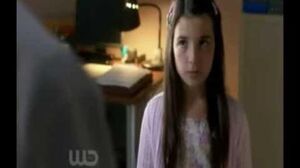