Force Paul Sheldon to revive the lead character Misery Chastain in his series of novels (succeeded in the novel, but failed in the film).

Kill Paul Sheldon and herself (both failed).

Anne Marie Wilkes, or better known as Annie Wilkes, is the main antagonist in Stephen King's 1987 novel Misery and the 1990 Rob Reiner film adaptation of the same name. She is also loosely based on Genene Jones, a real-life nurse convicted of murdering her patients. She was Paul Sheldon's former number one fan and his archenemy.

Annie is a severely mentally ill, demented and obsessive nurse (with the stereotypical traits of the nurse as a tormentor and an angel of death-type of figure). the self-proclaimed biggest fan of her favorite author, Paul Sheldon. She was ranked #17 on AFI's 100 Years...100 Heroes and Villains. She has an undying love for pet sow pig called "Misery", named after her all-time favorite fictitious book character Misery Chastain. She is the one responsible for murdering her father, roommate, and a lot of patients and infants during her years.

Annie was born in Bakersfield, California and she graduated from the University of Southern California's nursing school in 1966 (in the film she graduated from the Los Angeles nursing school in 1972). While serving as a head maternity nurse at a Boulder, Colorado hospital, several infants in her care died under mysterious circumstances. She was tried for their deaths, but she acquitted for lack of evidence. But the press — which called her "the Dragon Lady" — strongly implied that she was in fact guilty. Paul also learns that she killed several patients at other hospitals where she worked, but no one noticed because they were either very sick or suffered debilitating injuries beforehand. Annie also killed her childhood neighbors and their father, her own father, her college roommate, and a hitchhiker she allowed to stay with her — in total, almost 70 people.

Paul also finds out that Annie used to be married to a physical therapist named Ralph Dugan, who later divorced from her, citing "mental cruelty".

In the movie, Paul's car is hurled off the road as a result of a snowstorm, which lands near Annie's private property. The crash has caused a bilateral fracture of Paul's legs and rendered him unconscious. He is rescued by Annie a short time later and wakes up in her house. She first appears to be a kind, nurturing caregiver, and Paul allows her to read his manuscript in exchange for saving him. Paul claimed he grew tired of writing nothing but Misery novels and desired to create new characters and new stories.

When it is revealed that Paul has killed off Misery Chastain, she angrily screams at Sheldon for this. She then forces Paul to burn his manuscript and she tells him to write a new one, in which Misery is alive and well. She also gives Paul potent medication that will serve a double effect, numbing the pain whilst keeping his imagination active for writing.

While Paul writes, he tries to escape several times. When she learns this, Annie brutally breaks Paul's ankles with a sledgehammer in an act of "hobbling", and says to him, "God, I love you.".

Later in the movie, after investigating Paul's disappearance, Sheriff Buster decides to check out Annie's house and he eventually finds Paul locked up in the basement. Before he can free him, Annie shoots him with a shotgun and she then tries to kill Paul as well, but he convinces her to let him finish the novel.

Eventually, he manages to finish the novel and he tells her to get him some wine. When she comes back, Paul says she did good but tells her to bring him another glass, to which she does. Right, when she leaves, Paul is about to set the book on fire, but he waits until Annie comes back. When she does, Paul sets fire to the paper in front of Annie, who begs him not to do it, to which Paul asks why not since he learned it from her, and he proceeds to set the whole manuscript on fire.

As a panicking Annie tries to put it out, Paul bashes her over the head with the typewriter. When she falls backward, Annie finds her arm on fire, to which she manages to put out. Enraged, Annie attacks Paul and swears for the first time, calling Paul "a lying cocksucker", prompting Paul to blind her in one eye with his thumb and punch her in the face. On the floor with blood pouring from her eye, Annie takes out her gun and shoots Paul in the arm but this doesn't faze Paul and he tackles Annie and wrestles her on the floor. During the struggle, Paul bangs her head against the floor and shoves the burnt paper in her mouth, telling her to "eat it 'til you choke you sick, twisted fuck" but she kicks him in the crotch and he rolls off of her but he trips Annie and she falls, hitting her head on the typewriter.

Thinking she's dead, Paul wheels himself to the door, but Annie wakes up and jumps onto Paul's back, continuing to attack him. Paul then manages to bite Annie's hand and throws her off of him. He then grabs a metal pig statue that Annie uses as a doorstop and smashes her in the face with it, crushing her skull and killing her. In the novel, the police are initially unable to find Annie's body, much to Paul's horror. However, after searching the premises they find that Annie had fled to the barn to retrieve her chainsaw where she ultimately succumbed to her head injury and died.

A year later in New York City, Paul is able to walk with the help of a cane and he meets his agent discussing making a non-fiction novel of what happened to him. Paul disagrees, then suddenly sees Annie. However, that is only a figment of his imagination, as it was then shown to be another woman who is waiting on Paul. The waitress tells him that she's his biggest fan, to which Paul nervously responds "That's... very sweet of you..."

Annie Wilkes will return in season 2 of Castle Rock to be played by Lizzy Caplan.

In the start, Annie Wilkes seems like a kind, caring, and pleasant person, but as the film progresses, she starts to show her true colors, in being mentally disturbed and psychopathic, she also suffers from multiple mental illnesses. In a special feature on the collectors' edition DVD, forensic psychologist Dr. Reid Meloy said that Wilkes' personality (as portrayed by Kathy Bates) is a virtual catalog of mental illness. According to Dr. Meloy, Wilkes suffers from bipolar disorder, borderline personality disorder with schizoid, schizotypal, and obsessive-compulsive and sadomasochistic features.

She masks her psychosis with an enthusiastic, friendly, perky and kind personality. Annie's personality is characterized by destructive and violent mood swings, alternating between sweet and charming and blind with fury. Despite her evil actions, Annie regards herself as a devout Christian and believes that God often speaks to her and instructs her, delusions which would fit the bill of Schizophrenia. Annie abhors profanity, becoming enraged if it is ever used in her presence, instead using words like "cockadoodie" and "fooler", but during the climactic showdown with Paul, she finally explodes and calls him a "lying cocksucker".

Her extreme and rapid shifting moods, self-harm, fits of rage, violence and extreme delusions indicate she has borderline personality disorder. In the novel, she has day-long bouts with major depression, during which she is seen self-harm; Sheldon also finds evidence that she gorges herself on vast quantities of food. A reclusive and hermitlike individual who lives by herself, Annie is prone to bouts of depression and appears to have severely low self-esteem and exhibits suicidal thoughts and behaviors at times, particularly on rainy nights.

She has an unhealthy obsession with romance novels, particularly Sheldon's Misery series. She has difficulty distinguishing between them and reality. Her house is very well-ordered and she is a control freak who feels a strong need to have power over others. In addition to her borderline personality disorder, Wilkes also displays schizoid, schizotypal, and obsessive–compulsive personality disorder features and tendencies, due to her lack of remorse for the many people she has killed.

Anne Wilkes can effectively be considered a certifiable psychopath. Annie shows pronounced sadistic tendencies, not only torturing Paul for disobeying her but also murdering countless infants and elderly people during her tenure as a nurse. Interestingly, Annie's intelligence is a subject of debate. She sometimes seems slow-witted, unintelligent and unsophisticated, mispronouncing dom Perignon for instance, but she is also highly intellectual, perceptive, cunning and capable of thinking quickly, able to predetermine many of the plans Paul was attempting to hatch.

She also graduated from the University of Southern California and pursued a nursing career across the country, albeit marred by the occasional unfortunate bout of infanticide. It can be argued that Annie is intelligent but lacks knowledge of certain social norms due to her mental illnesses, or that she is merely putting on another show to allow people to underestimate her true intelligence. 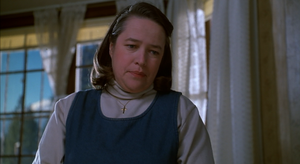 Annie taking the wounded Paul Sheldon into her home after he crashes his car in a blizzard. 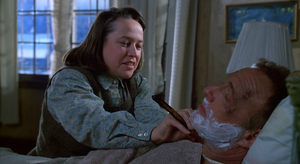 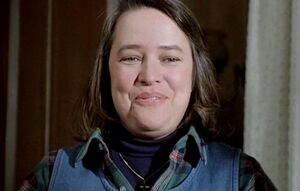 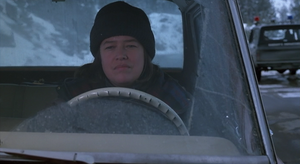 Annie driving in her car. 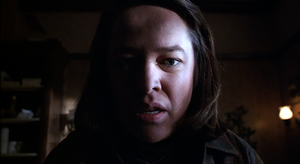 Annie becoming enraged when she learns that Paul has killed off her favourite book character, Misery. 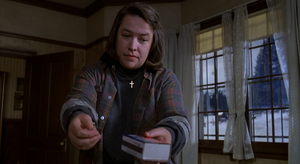 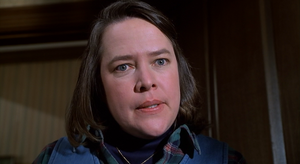 Annie getting mad with Paul. 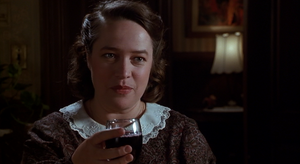 Annie having dinner with Paul, moments before he attempts to poison her. 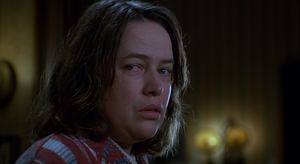 Annie sadly speaking with Paul during a rainstorm. 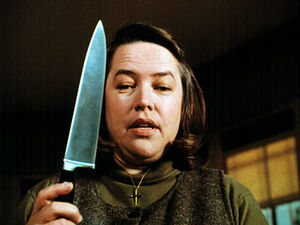 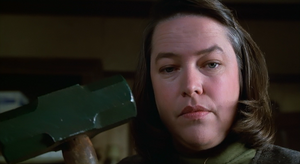 Annie about to hobble Paul with a sledgehammer. 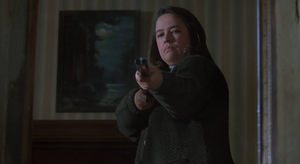 Annie after assassinating Sheriff Buster with a shotgun. 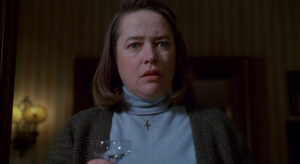 Annie before Paul burns the new manuscript she is so eager to read. 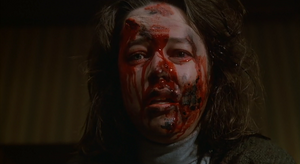 Annie smashed in the face with a metal pig sculpture, killing her. 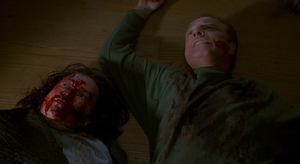 Annie lying dead next to Paul in her hallway. 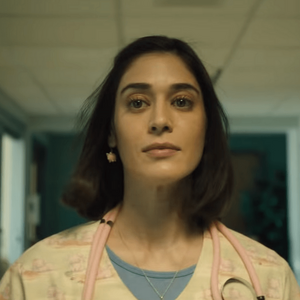