Annie and Bonnie are tragic villains in the 2018 neo-noir film Terminal.

Both were portrayed by Margot Robbie, who also portrayed Harley Quinn in the DC Extended Universe.

The twins backstory revealed they were the result of a tryst between a woman named Chloe Merriweather and a gangster named Clinton Sharp. Knowing what a dangerous influence Clinton was, Chloe kept them away from the girls and raised them on her own while working as an exotic dancer (among other professions) to keep things afloat. When Annie and Bonnie were children, Chloe had seen Clinton orchestrating one of his murderous acts, and to keep her quiet, Clinton went to Chloe's house and set it ablaze. Chloe managed to save her twin daughters but was unable to save herself, as she was tragically killed in the fire. Annie and Bonnie ended up sent to St. Catherine's orphanage where they were subjected to sexual abuse by teacher Bill Braithwaite.

In adulthood, Annie and Bonnie spotted they estranged father now going by the name of Mr. Franklyn, continuing his criminal activities, and it was at this point where the twins plotted their revenge on the man who killed their mother and was responsible for their tragic childhood. Annie was introduced as a waitress  working at a diner when she encountered Bill who was terminally ill and at death's door, and she spent the entire time discussing his illness which led to Annie suggesting suicide to end Bill's suffering.

Annie was also spotted at the diner by assassins Vincent Escariot and his partner Alfred, but the pair also spotted her as an exotic dancer, unaware that it was Bonnie in disguise. Bonnie's appearance came when she killed Nigel Iling by handcuffing him to a bed and crushing his chest with her thighs. After this she formed an alliance with Alfred after an elderly janitor (Clinton in disguise) appeared with a recording which revealed that Vincent made a deal with Mr Franklyn to kil Alfred for a huge payout.

Meanwhile Annie took Bill to a ventilation shaft and urged him to jump to his death only for Bill to back out and lash out at Annie while accusing her of being twisted and naughty due to the fact that he taught girls like her. The use of the word naughty revealed something that Annie had always known; he did remember her. Bill claimed that he didn't remember Annie but Annie revealed their past, which included being molested by Bill. After the reveal, Annie took Bill's pen and jabbed him in his neck before dropping him into the shaft.

Elsewhere, Bonnie revealed her alliance with Alfred to Vincent which was followed by Alfred shooting Vincent to death. The pair was set to go on a dinner date only for Bonnie to turn heel and point a gun at Alfred right before she shot him in the head. The villainess went to the janitor to dump the assassins' bodies and after Clinton removed his disguise, he engaged in a phone conversation with Bonnie stating he had a working relationship from that point on.

In a huge surprise twist however, Clinton found himself standing in between Bonnie and an exact duplicate (Annie) with the women revealing themselves as twin sisters before one of them knocked out Clinton. The villainess then took Clinton to an isolated area where they told their backstory and revealed themselves to be Clinton's estranged twin daughters, a result of Clinton's tryst with Chloe. They also informed their father of what they went through after he killed their mother as well as revealing their vengeful plot to get close to him so they could kill him. Clinton begged and later demanded for Annie and Bonnie to reconsider their actions, but the twins stated that it was too late and they had to avenge their mother.

Annie jabbed a needle into Clinton's right eyebrow and Bonnie later finished the job by hammering a nail into their estranged father, killing him instantly. The film ended with the twins walking off together satisfied that they fulfiled their vengeful plan. 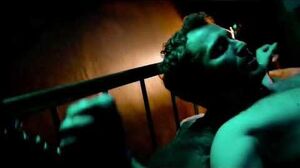