Guardian of Furnace of Eight Divisions

Guard The Furnace of Eight Divisions.

Annin is a minor character in Dragon Ball. She guards the sacred Furnace of Eight Divisions. Despite working for King Yemma, Annin looks more human than ogre. Annin is immortal and ageless.

Being the sole pyre keeper of the Furnace of Eight Divisions for over ten thousand years, Annin is very ancient, in spite of her teenage appearance.

Goku, however, refuses to give up his request and persists in attempting to convince Annin, but this eventually leads into a brief fight between the two, to which Goku discovers her true age and unintentionally mocks her for it. Enraged at Goku's insolence, Annin turns into a giant to pulverize him, employing different methods to do it, for example, using her headpieces to stab Goku, as well as the strong, gale winds caused by flapping her cape. Fortunately, Goku was able to counter Annin's furious attacks with the unrelenting power and force of the

Bansho Fan, which consequently shocks Annin at its convenient and sudden presence.

Annin then suggests another way of extinguishing the flames heading for the Ox-King's village, guiding Goku through the flames of the Furnace of Eight Divisions, they managed to quell the fire, saving the Ox-King and his castle. Following her debut appearance, Annin is never seen or mentioned again.

Annin possesses a high degree of control with her guan dao, as well as superb reflexes and power beyond that of natural beings. It is evidenced that Annin possesses a fair degree of strength exceeding the capacity of Earthlings. This is implied because she is capable of reducing an entire boulder to smithereens with the simple toss of a noodle bowl, however, the full extent of her power is revealed during her Giant Form. Theoretically, Annin's strength is heightened to that of monstrous levels in her Giant Form, allowing her to attack more ferociously. During her brief fight with Goku, who was below her fifty feet stature, she was able to counter all his attacks and somehow, battled on an even ground. Though when on the same scale, Goku seemingly outmatched her with little effort. 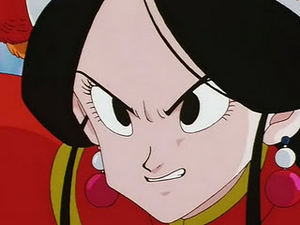 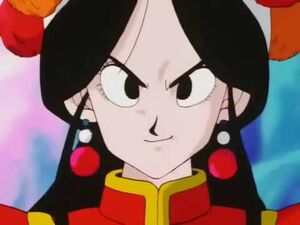 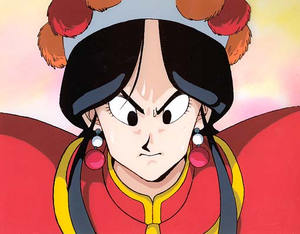 Annin's evil stare.
Add a photo to this gallery

Retrieved from "https://villains.fandom.com/wiki/Annin_(Dragon_Ball)?oldid=4070742"
Community content is available under CC-BY-SA unless otherwise noted.