Grace Ryan (voiced by Kate Miller) is a television reporter who often covers Awesome X's battles. Grace considers herself to be Xander's girlfriend and desperately wants to bear his children, although Xander takes their relationship much less seriously and does his best to break things off with her. Grace is unaware that Xander is secretly Awesome X.

Grace often proves to be pushy, obnoxious, clingy and self-idolizing, to the point where even her news crew wishes for her death. Despite Xander's attitude toward her, Grace remains fanatically devoted to him, even freezing some of his semen without his knowledge, which she later uses to impregnate herself. When she falls into a barrel full of superintelligent radioactive ants, the ants inhabit her brain and Grace frequently becomes "Antagone", a criminal mastermind; after Xander rejects her marriage proposal, Ryan becomes Antagone permanently and is bent on killing Crews. As Antagone, she takes great pride on her pregnant belly much to Valerie's jealousy. Later she is killed by her own mutated child, who devours her head upon birth. 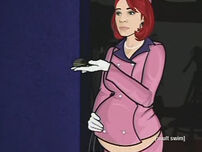 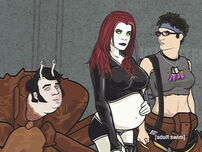 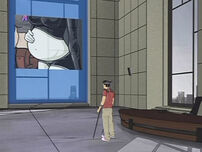 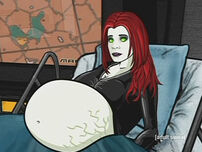 Add a photo to this gallery
Retrieved from "https://villains.fandom.com/wiki/Antagone?oldid=3589687"
Community content is available under CC-BY-SA unless otherwise noted.