Queen of the Xenomorphs

Take revenge on Scar and Lex for killing her children (both failed).

The Antarctic Queen is the queen of the Xenomorphs who appeared as the main antagonist of the 2004 film Alien vs. Predator.

She is five-thousand years old, much older than the First Acheron Queen. She is also bigger and stronger as well.

The Antarctic Queen was captured by the Predators thousands of years ago and imprisoned inside a pyramid in Antarctica to lay eggs. Humans were sacrificed as hosts for the Xenomorphs and when they matured into adults they would be hunted by young Predators as a rite of passage. Since the Antarctic Queen was trapped in the pyramid for centuries, her children eventually outwitted the Predators and destroyed the human civilization that the Predators built with them. Unfortunately, the Queen was unsuccessful in freeing herself and was refrozen, unable to move until the next rite of passage.

Finally, in 2004, three Predators, Scar, Celtic, and Chopper, were sent to the pyramid to kill the Xenomorphs for another rite of passage. The humans (whom arrived earlier) activated the pyramid before the Predators could enter. The Queen was painfully reawakened and begun to lay her eggs.

The awakening was triggered by the humans retrieving the plasma casters, taking the sacred weapons of the Predators which were vital to the success of the hunt. The eggs hatched in the Sacrificial Chamber and implanted part of the human team with embryos, who would burst out and mature. The Xenomorphs quickly overran the pyramid, resulting in Celtic and Chopper being killed by Grid, a Xenomorph with leadership qualities who was still subordinate to the Queen.

Scar teamed up with Alexa Woods, the only survivor of the human team, and they turned the tides on the Xenomorphs. The Queen sensed her children getting killed and called for Grid and her other children to release her. They complied and crawled over her body, biting into her flesh, allowing the Queen’s acid blood to burn away the chains that held her captive for so long. The newly freed Queen rampaged through the pyramid.

The Queen managed to tunnel out of the pyramid right before it was destroyed by Scar and Lex. She became enraged when she witnessed her children killed in the blast. She saw the two responsible for their deaths and engaged them in battle. Scar made a stand against her, but was savagely beaten and rendered unconscious. The Queen raised her spear tail to end his life and to avenge her children, but Lex stabbed the Queen in the throat with a spear, causing her to stumble into a nearby house. She pulled the spear out of her throat and chased Lex, trapping Lex and trying to bite her, but Scar recovered and speared her through the head.

As the Queen thrashed and screeched in pain, Lex and Scar noticed a chain attached to her, which had not been burned off when the Xenomorphs freed the Queen. They grabbed the chain and attached it to a water tower just as the Queen ripped the spear out of her head. Lex and Scar tried to push the water tower off the cliff, but the Queen mortally wounded Scar with her tail. As she prepared to end Scar with a strike of her maw, Lex managed to push the water tower down the cliff, pulling the Queen away from Scar. She made one final attempt to kill Lex, snapping at her, but she missed and was dragged off the cliff and sank into the freezing ocean below. The Queen had been defeated, but at a price: Scar had died of the wounds inflicted on him, and he was implanted with a chestburster that would become the Gunnison Predalien. It is unknown whether or not the Queen drowned, as her final fate wasn't shown, nor can it be confirmed that Xenomorphs need to breathe.

Her personality is more or less same with other Xenomorph Queens. She values and protects her brethren like any good mother would, and had no qualm in killing any non-xenomorph lifeforms whether as enemy or merely host for her facehugger children. Antarctic Queen has harbored a terrible grudge against her Yautja captors whom used her to breed more Xenomorphs only to be killed for their Rite of Passage. In spite of this, she is very persistent even whilst being restrained: She has tried to called her brethren for help every time the Rite of Passage began, though only succeed in 2004 where she finally freed thanks to Grid's newfound knowledge about their kind's corrosive blood. Unfortunately, she did a fatal mistake where she ignored the final restrain that still intact on her body: The chain on the said restrain later used by Alexa and Scar whom tied it to a water tower which later dropped to the ocean, causing her to be pulled down to the ocean floor, where she apparently drowned. 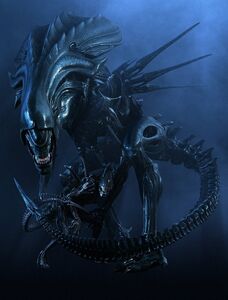 The Queen with a Xenomorph Drone. 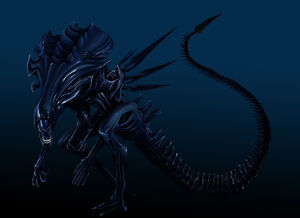 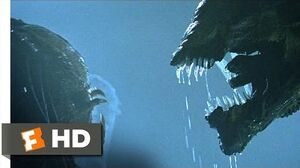