The King of Bats

Commander of the Koopa Troop (temporarily, until he was betrayed)

Black magic
Umbramancy
Animakinesis
Shapeshifting
Megethoskinesis
Breathing fire
Generating blasts of dark energy
Sleep inducement
Manipulation of sleep patterns
Multiplying himself into several copies
Hypnotism through his voice
Levitation
Portal creation
Healing
Producing a sonic shriek that can break down obstructions (and repair them).
Merging with others to make them more powerful and heal them.
Somnipathy
Ability to summon and manipulate his Antasmunchies

Creating chaos and nightmares throughout Pi'illo Island and within the Dream World.

Obtain the Dark Stone and rule the world (failed).

Take revenge on the Pi'illos by crushing the Dark Stone (temporarily succeeded).
Retrieve the Dream Stone and rule the world.
Destroy Prince Dreambert and the Mario Bros.
Take revenge on Bowser for betraying him (all failed).

Antasma, also known as Akkumu (in Japanese: アックーム) in the Japanese version, is the central antagonist of the 2013 Nintendo 3DS game Mario & Luigi: Dream Team. He is the insidious bat king and the archenemy of Prince Dreambert. Bowser later became his ally before betraying him near the end of the game.

He was voiced by Akiko Sugimoto.

Antasma's speech is based on old Dracula movies with most words having "v"s in them and screaming tics which come from his bat side. In the Japanese version, his speech is written completely in katakana.

He makes careful decisions, since after his imprisonment, such as choosing whose power he needs to help realize his dreams, but can be jumped-on easily when in a false sense of security, such as Bowser attacking him in Dream's Deep and betraying him later on. He has a temper and strong hate for the P'illo's, especially Prince Dreambert. Others show fear towards him besides the Zeekeeper, who sees him as just a pest.

According to legend, Antasma was once a normal bat on Pi'illo Island until he somehow fed off a Pi'illo's nightmare which gave him power. He began continuously feeding on nightmares and eventually transformed into the evil Bat King.

At some point afterwards, Antasma then stole the Dark Stone in order to fulfill his chaotic dreams, but the Pi'illos led by Prince Dreambert (along with the Zeekeeper) managed to stop him by imprisoning him in the Dream World. But at the last moment, Antasma shattered the Dark Stone, causing its chunks to rain down everywhere on the island, turning all of the Pi'illos that they touched into stone and causing their civilization to vanish as his essence was sealed away.

Many years later, Pi'illo Island became an archaeological tourist attraction. Mario, Luigi, Princess Peach and Toadbert all come to this island for a vacation, but while Luigi sleeps, he has a nightmare where Antasma appears and destroys the hot air balloon they were travelling on.

Mario and Luigi then travel through Pi'illo Castle, where they stumble upon a stone pillow that was once Prince Dreambert, Luigi then sleeps on it and creates a portal to the Dream World. As Princess Peach takes a closer look at the portal, Antasma appears and kidnaps her, hoping to use her power for his sinister plans. Mario attempts to rescue her with the help of Dreamy Luigi, but Antasma escapes into Dream's Deep with Peach and seals the way behind.

After finally making it to Dream's Deep, Mario and Dreamy Luigi confront Antasma until Bowser appears, furious that someone besides him kidnapped Peach. Sensing much more evil power within him, Antasma makes an alliance with the Koopa King, and they combine their power to defeat the Mario Bros. and then escape to take over the real world.

They then steal the Dream Stone from Dozing Sands and take it to Mount Pajamaja, where they use the Dreambeats to put everyone on the island to sleep so that their dreams can restore the Dream Stone's power. Bowser wishes for a castle as his base of operations, thus creating Neo Bowser Castle, which has the power to destroy anything he pleases. Bowser then somehow kidnaps Peach afterward and places Kamek in her place.

When the Zeekeeper destroys Neo Bowser Castle's barrier and sends it falling, Mario and Luigi were able to enter and confront Kamek, who Antasma aids by transporting him into the Dream World. Antasma then has Bowser fall asleep while using him as a pillow in order to increase his power, but the Mario Bros. wake him up by defeating his giant form in the Dream World.

The heroes then confront Antasma and Bowser in the real world. The Bat King gloated that this time the outcome of the final battle will be different from before as he has Bowser to assist him, only to be shocked when Bowser betrays him by hurling him at the ground and then revealing that he was just using Antasma to further his own goals. As Bowser leaves him to be destroyed by the Mario Bros. while taking Peach and the Dream Stone for himself, Antasma is deeply enraged by this deception and swears to take revenge after dealing with the heroes.

He then fights Dreambert, and then reveals that he made a wish with the Dream Stone for the power to open dream portals at will, thus preventing him from ever being imprisoned again. Antasma defeats Dreambert, but Mario (re-entering the Dream World) fights him alongside Dreamy Luigi as the penultimate boss, and they defeat him. Returning to the real world immediately after Mario exited, Antasma screeches in pain before he inflates like a balloon and his body explodes, thus bringing the Bat King to an end once and for all.

Although having no direct appearance or reference dedicated to him in the game's story, Antasma makes a cameo appearance on one of Bowser's amiibo-exclusive Character Cards: a level 2 card that forces an enemy to drop the item they carry. He appears in his bat form on the card.

Antasma appears as a support spirit in Super Smash Bros. Ultimate. His ability allows the fighter to start the battle equipped with Death's Scythe. He can be obtained by purchasing him from Anna's Emporium for 1,000 Spirit Points, or by defeating him in a spirit battle, which is against male Robin on the Battlefield variation of Peach's Castle. The floor is sleep-inducing and food items rain down, which powers up the opponent the more food they eat. 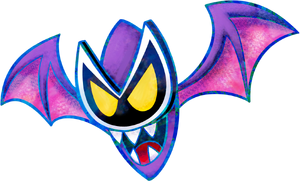 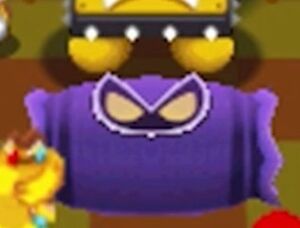 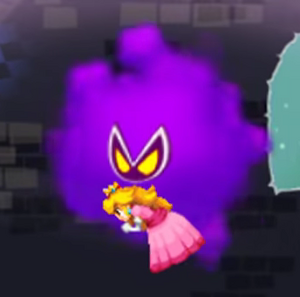 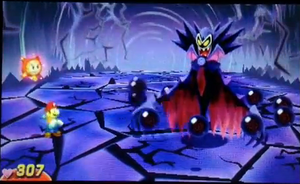 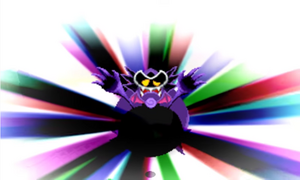