Troutt is a center-right conservative with a strong popularity base among moderate voters in the U.S. As such, he represents a threat to interests of both sides of the U.S. political spectrum. A veteran of the Invasion of Grenada in 1983, Troutt was accused of several friendly-fire incidents that have been suppressed from the public record.

Before his assassination took place, Troutt is in Sapienza meeting Silvio Caruso, as a part of a tour of European power brokers and moneymen in anticipation of a 2024 Presidential Bid. However, he was assassinated by Agent 47 during his journey.

Troutt is a rude, ignorant and abrasive individual. He also has little patience for anyone and mocks Caruso's taste in literature with ignorant remarks while being escorted by one of Caruso's housekeepers. Despite being a rather unlikable person, he does praise Caruso for the quality of his wine. He also assures his wife that she'll be alright when she's upset by a journalist investigating him. 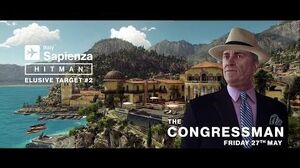 Retrieved from "https://villains.fandom.com/wiki/Anthony_L._Troutt?oldid=3940441"
Community content is available under CC-BY-SA unless otherwise noted.