Joking around and singing.

Anthony Lamb is the secondary antagonist in the 2021 action film Copshop.

He is a psychopathic contract killer tasked to kill Teddy Murretto by Detective Deena Schier to cover up her corruption and activities. He is the one responsible for killing Teddy's family.

He was portrayed by Toby Huss.

Anthony is described under the pointed fact by Bob that he is a complete psychopath who enjoys killing others for kicks and his own amusement, even going as far as to not be one of killing a child when he killed Teddy's family.

He is known to have a habit of making several jokes in a taunting way that adds up to his giddy sadism and naturally has no respect for those he worked him with as he made fun of Huber's weight. He's also capable of going through a raging state when Bob slit his throat with his knife.

Lamb was stated to have caused multiple manslaughters while taking hold of a deadly weapon and from some point onward, he killed Teddy's ex-wife and child and was on the bounty for $65,000 by a number of mob bosses through another point when they were after his head.

Lamb first appeared when Schier ordered him to take out Teddy, he disguised himself as a balloon man before deciding to blow his cover on killing several cops and chasing Valerie down to the cell room. He would then meet up with Bob Viddick, an old associate he knew about, as he made a few several taunts to the latter and then to Teddy when he first recognized him. He then has Huber convince Valerie to let him inside for the kill before backfiring, deciding to find another way inside the room before singing how he'll kill Teddy.

While Huber was working on breaking down the bathroom wall with a sledgehammer, Lamb would laze around and make fun of his weight while he continued working. When officers Ruby and Barnes discovered the two, Lamb shoots Ruby for dead while he left Barnes alive with only his legs shot as he gives Huber his machine gun to kill Barnes or he'll do it himself. Teddy, out from his cell, then proceeds to hunt Lamb in vengeance for his family after Huber killed Barnes as the two separated within the bathroom area.

Throughout the chase, Lamb has been taunting Teddy numerous times while explaining how he killed his ex-wife and child before he ends up shooting Huber instead by Bob. When Lamb tries to use a knife to stab Bob, the latter slits his throat and Lamb couldn't do a thing but laugh it off and make an attempt to kill Bob while struggling and angrily squealing.

Once Teddy shoots Bob, he shoots the struggling Lamb in vengeance. 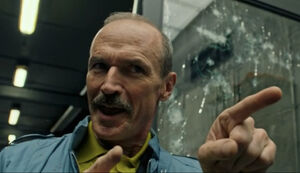