Get revenge on Dr. Zomboss for bullying them (temporary succeeded).

The Anti Bully Squad are group of antagonists in the comic book Plants vs. Zombies: Bully For You. The group includes Mr. Grim-Brim (a Basic Zombie), Stilts (an Imp), and Greg-Gargantuar (a Gargantuar). They were college zombies who plotted revenge on Dr. Zomboss for his harassment on them.

After receiving mysterious phone calls from Neighborville civilians when they were being harassed by Dr. Zomboss, the Anti-Bully Squad began to plot their revenge on him. Before Zomboss could perform his zombie attack, they arrived and kidnapped him, while the zombies attacking the plants.

At the prison cell, Greg-Gargantuar let Mr. Stubbins go potty, leaving Mr. Grim-Brim and Stilts to take care of Dr. Zomboss. He tried to convince them to join him, but they refuse and planned to do some "not so important things" such as stealing his toe clipping collection along with destroying the neighborhood.

They later went back outside to prepare for their attack. As Dr. Zomboss trying to chase Mr. Stubbins, he got caught by them again and told him that they manipulated his zombies to their side, with him being a part of them. However, before the fight, Zomboss refused to come out and closed the door to outsmart them. They tried to attack the Plants, who were led by Nate Timeley and Patrice Blazing, but they failed and ran away. One week later, they returned to the college with themselves injured. They walked in the gym and saw Dr. Zomboss asked them to play "dodgeball", with a wrecking ball, leading them to their defeats. 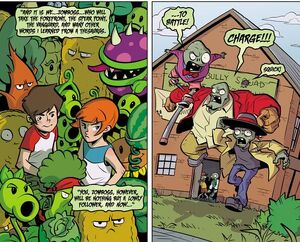 Retrieved from "https://villains.fandom.com/wiki/Anti-Bully_Squad?oldid=3757064"
Community content is available under CC-BY-SA unless otherwise noted.