To cause bad lucks on earth.

The Anti-Fairies are a magical race that are the exact opposite of Fairies and minor antagonists in The Fairly OddParents but the main antagonists alongside Anti-Cosmo in the Nerds War episode.

Anti-Fairies represent bad luck. They use their magic, typically during Friday the 13th, to cause pain and suffering to anyone who commits superstitious acts, such as crossing a black cat's path or breaking a mirror. They mainly enjoy causing havoc on Earth through bad luck, and unlike Fairies, they do not have God-children. They are ruled by Anti-Cosmo who, unlike his fairy counterpart, is an evil genius.

All Anti-Fairies are dark blue in color with pointed ears, black crowns and wands, and bat-wings as opposed to the insect wings of Fairies and there is an Anti-Fairy for every Fairy that exists, including baby Poof. They all reside in Anti-Fairy World and they are ruled by Anti-Cosmo. In their first appearance, Timmy Turner needed a special magical device just to see them. However, since subsequent appearances, they can be seen by Timmy and other characters without the need for special gadgets. This does not explain how they remain hidden to humans. 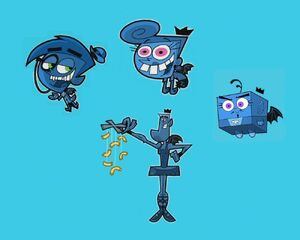