Anti-Life Virus
Zombies
The Infected
Monsters
The Blighted Ones

Hunting and murdering those who aren't apart of the infection.

To cause mayhem and destruction.

The Anti-Living are the main antagonist in DC's story, DCeased. They're creatures that were accidentally caused by Darkseid and DeSaad after attempting to abstract the Anti-Life Equation through the use of Black Racer and Cyborg.

After Cyborg is teleported to Earth, he accidentally causes the virus to spread and starts the apocalypse.

After Darkseid was defeated, he was exiled back to Apokolips but unknown to the Justice League, he had Cyborg at the planet in order for him to gain the Anti-Life Equation. He summoned Black Racer and used him to gain the Equation with the use of DeSaad. However, when DeSaad stabbed Black Racer, the energy from him caused him to merge from Cyborg which resulted in Darkseid to be infected and DeSaad teleporting Cyborg to Earth.

When Cyborg was sent back, he accidentally caused the virus to be spread through technology and resulted in the world becoming infected. As a result, the world went into darkness as many civilians and heroes became infected with the virus. Superman managed to get many heroes in order to move everyone into another Earth. They managed to do this successfully after Superman turned infected due to stopping the Flash by exploding him in multiple species.

Found on a ship by Aquaman 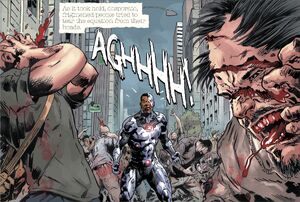 Retrieved from "https://villains.fandom.com/wiki/Anti-Living?oldid=4273887"
Community content is available under CC-BY-SA unless otherwise noted.