NOTE: This article is about the incarnation of the Anti-Monitor from the Arrowverse. The mainstream version can be found here: Anti-Monitor.

Crisis on Infinite Earths (The CW)

Antimatter clone of the Monitor
Ruler of the Netherverse

Mobius, better known as the Anti-Monitor, is the overarching antagonist of the Arrowverse.

He is a cosmic being of supreme power and malevolence that desires the annihilation of the multiverse and all life in it by any means necessary. All so that he could replace it with his own Antimatter universe and rule over all of it. He is opposed by his more benevolent mirror counterpart, the Monitor.

During the multiverse's creation, Mobius at one point could have been killed by his benevolent counterpart, the Monitor, but Novu spared his life, which he deeply regretted as Mobius began to terrorize the multiverse as the Anti-Monitor. At some point in time, he became the master of the Shadow Demons, using them as his footsoldiers in his army. When the threat of the Anti-Monitor became apparent, the Anti-Monitor was confined to a chamber, although whether it was the Monitor who trapped him there or not remains unknown, in where he built an antimatter cannon to execute his scheme. When Barry Allen of Earth 90 charged towards the Monitor and was repelled, he found himself within the reach of the Anti-Monitor, who whisked him into his prison and forced him to run on a treadmill to power the weapon. During a test run of the antimatter cannon, the Anti-Monitor used it to destroy Earth 2.

The Anti-Monitor was also unintentionally freed by Harrison Nash Wells, later known as Pariah, thinking he was the Monitor. After he was freed, he unleashed a wave of antimatter all across the multiverse that destroyed Earth-89, Earth-9, Earth-X, and Earth-66.

After an antimatter signature was detected on Earth 38, the heroes were gathered there to stop him, so the Anti-Monitor sent the Shadow Demons to stop them from interfering. Even though the heroes failed to stop the Anti-Monitor and the Shadow Demons from destroying Earth 38, they managed to save half of all life on their Earth, but at a cost, Oliver Queen, also known as the Green Arrow, was killed in the process, only to be revived later.

Sometimes later, the Anti-Monitor communicated with Lyla Michaels, also known as Harbinger, through unknown means and, despite her pleas to stop, he forcibly summoned her to his lair. Once she arrived, the Anti-Monitor introduced himself, while revealing that the worlds were falling under his power and every death allowed for him to steal more power from his counterpart, and the Anti-Monitor demanded Harbinger's cooperation and proclaimed that there was work to be done.

After all the Earths in the multiverse were destroyed except Earth 1, the Anti-Monitor possessed Harbinger and teleported to the Waverider and tried to fool the multiverse's heroes. However, the heroes were clever enough to see through his guise and futilely tried to kill him. He easily overpowered the heroes and clashed with and eventually defeated and killed the Monitor, and had his Antimatter wave destroy Earth 1 while the multiverse's survivors helplessly watched and the Anti-Monitor proudly proclaimed his victory. As the wave was heading towards the ship, Pariah teleported the Paragons away, confusing the Anti-Monitor who asked Pariah where did he send them only to learn it was somewhere he can't touch them, the Vanishing Point. Nevertheless, the Anti-Monitor won the day as the Antimatter wave destroyed the heroes, but not before they defiantly proclaim the Paragons will fight to their last breath and use any means necessary to defeat him, which the Anti-Monitor scoffed at and releases his control from Harbinger before the Antimatter wave destroyed them, completing his victory, despite that he failed to kill the Paragons.

Once Jim Corrigan taught him how to use the Spectre's power, Oliver headed to the Vanishing Point to rescue the Paragons and strengthen Barry's powers. With his increased speed, Barry ran through the Speed Force, but was ambushed there by the Anti-Monitor, losing everyone else across the Speed Force.

Once Barry retrieves everyone, they arrive at the dawn of time, only to learn the Anti-Monitor is waiting for them, explaining that he will always learn of the multiverse's existence no matter what, as there will always be a Novu in the multiverse who cannot give up his ambitions, and sends the shadow demons to destroy them. Oliver appears and gives them a pep talk, telling them that they will have to hold the line, buying them time to recreate the universe. The Paragons run headlong into battle, fighting the shadow demons while Oliver and the Anti-Monitor watch from above and then face each other, one-on-one, in the battle for reality itself. As they are even matched, Oliver uses the Spectre's power to restore the multiverse, with the Paragons providing additional assistance via Lex's Book of Destiny page and seemingly destroying the Anti-Monitor.

However, the Anti-Monitor survived the Spectre's power and the heroes realize that he cannot be killed because he's made of antimatter, but they can destabilize his form, and have him shrinking for eternity. He send the shadow demons to fight the heroes and they leap into fighting them and as they do, the Anti-Monitor reveals himself to the Paragons and announces his new plan to renew his destruction of the new multiverse and warns the heroes that fighting is useless and forces them to surrender. The heroes dedicate their fight to Oliver and his sacrifice to restore the multiverse and they all fight the Anti-Monitor, but he easily deflects all of their attacks and the Anti-Monitor grows huge to end them all. He warns everyone that the age of heroes ends now.

The Anti-Monitor is an extremely unpredictable, cruel, evil, homicidal, and mostly manipulative individual presumably from the most diabolical kind that can ever be in the Multiverse.

Over the years of his existence, he was proven to be famously known for his incredible, unimaginable evil, wanting to destroy the entire Multiverse killing off an infinite amount of innocent lives without any kinds of guilt or remorse, implying how much far ruthless he truly is, and would not hesitate to kill or destroy every single life form which stands in his path.

The Anti-Monitor is an extremely intelligent, sophisticated and manipulative individual, knowing how to utilize these psychological aspects to manipulate or even break those which survived the cataclysmic destruction he had done, and often he is shown to be completely arrogant due to his immensely powerful godly position, deeming himself nearly a god, even more than his counterpart the Monitor.

His manipulative side is proven to be shown when he is convincing Harrison Nash Wells into freeing him from his chamber, an action the Anti-Monitor knows that his counterpart Monitor would regret on imprisoning him in the chamber. Additionally, the Anti-Monitor is completely in denial that the entire Multiverse should exist, stating that only the Anti-Matter Universe should be existing, thus driving him to use his powers to be able to erase the Multiverse. 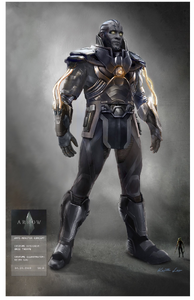 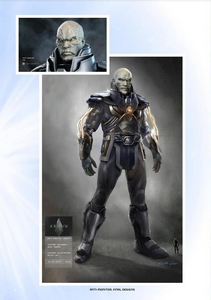 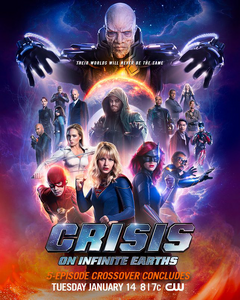 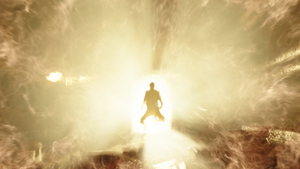 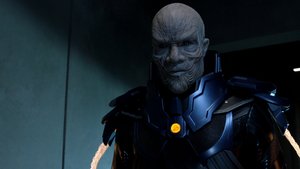 Anti-Monitor revealing himself to Harbinger. 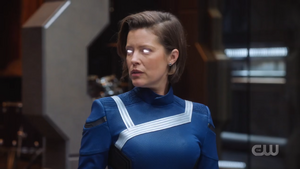 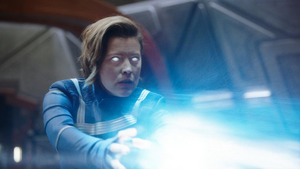 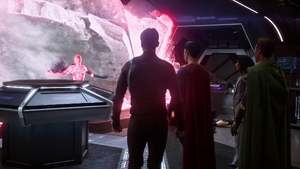 Anti-Monitor wiping out the Waverider and everyone on it. 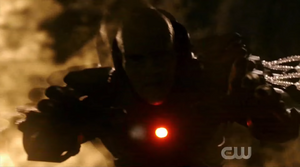 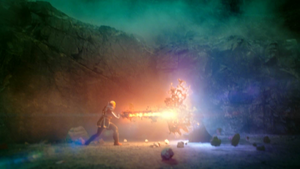 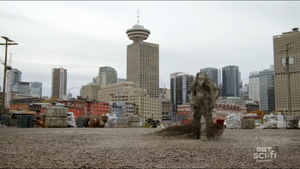 Anti-Monitor growing during his final fight with the heroes. 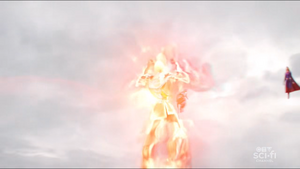