The Anti-Personnel Control Squad, also known as the Anti-Personnel Vertical Maneuvering Equipment Squad in manga translations, is a hostile organization and serves as the secondary antagonists of the Uprising Arc of Attack on Titan. It is an elite squad attached to the Interior Police of the Military Police Brigade and is under the command of Captain Kenny Ackerman. Its members are equipped with Anti-Personnel omni-directional mobility gear and secretly serve Rod Reiss.

All members of the squad were aware of Kenny's true goal and helped him in his quest to achieve it. As a result, they remained loyal to him over the Royal Government.

The Anti-Personnel Control Squad was formed two years after the Fall of Wall Maria with the approval of the Assembly and the Military Police leadership. The squad was placed under the command of Kenny Ackerman despite lacking any previous military experience. Caven had been skeptical of why the squad was formed and initially thought that humanity had given up fighting the Titans and would now be fighting for what was left. 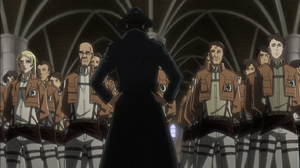 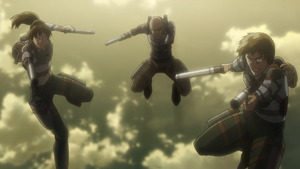 Add a photo to this gallery
Retrieved from "https://villains.fandom.com/wiki/Anti-Personnel_Control_Squad?oldid=3700299"
Community content is available under CC-BY-SA unless otherwise noted.