He Who will Erase Us

Leader of his own interstellar alien empire

Erase the universe to recreate it in his image.

He is the evil younger twin brother and archenemy of Pops Maellard and is a godlike embodiment of evil, who is so powerful that he is capable of destroying the universe. He wants to kill his older twin brother Pops and wipe out the universe to recreate it in his own twisted image. He is the strongest and powerful villain in the Regular Show series, as well as the cause of most of the chain of events in recent seasons.

He was voiced by Robert Englund, who also played Freddy Krueger in the A Nightmare on Elm Street franchise, the Riddler in The Batman, Bill Gartley in The Mangler, and the title character in the 1989 film adaptation of The Phantom of the Opera.

He is similar to his brother, Pops, but all black around him and fully glows white without any pupils. He has a lightning shaped mustache and beard with sharp teeth, in addition of a black colored cape.

As the complete opposite of Pops, Anti-Pops is evil, cruel, sinister, authoritative, and megalomaniacal as he wants to rule all and destroy his brother who is destined to defeat him. He also gives out bad reviews to the point of attempting to giving them a negative number of stars. By the end, however, it implies that he shows remorse, stating that he wished that he could take back all the one-star reviews as he and Pops are hurled into a star. Pops cheers him up, embraces his brother and smiles before meeting their end.

He and his brother Pops were born on their home planet Lolliland. For reasons that haven't been revealed yet, other than having been born with a completely different gift, he wants his brother dead.

At the beginning and end of each universe, the two brothers battle. This battle always ends in a draw and the universe resets. In his first full appearance he is seen killing a space store clerk, since he was taking too long to give his soldier his change. He then proceeds with an attack on the space tree, but Pops escapes his grasp. In his next appearance, he is frustrated that Pops has not been tracked, no special sauce came with his noodles, and that the lowest rating he could give the noodle company was zero stars and not negative five stars. Throughout this season, he is constantly trying to get Pops killed by doing various things like hiring Bounty Hunters. He eventually tricks Pops into meeting him at a space arcade and almost kills him. However, the rest of the park crew save the day, with Pops' trainer Earl also sacrificing himself to save Pops and is erased from existence by him.

In his final appearance during the season finale, he erases almost everyone from existence except Mordecai, Rigby, and Pops, who he was duelling with. He comes close to victory, but Pops tackles him with a hug and they are both killed by flying into the sun. Anti-Pops shows remorse for his actions by cowering before their death. Anti-Pops and Pops' demise ends the cycle of universal destruction and rebirth every 14 billion years, as well as resurrecting those who were erased by Anti-Pops.

He was defeated from Pops' hug and died from burning in the sun, along with Pops, thus he is now in the afterlife.

In The Missing Cases of the Tree House, Black Hat teleports both Anti-Pops and his brother from being incinerated by the sun, Anti-Pops then sees Black hat and pleads for him, only for him to have his face grabbed by the Creature, then out of Hate, instead he then kicks his Older Brother Pops into the Sun instead of him and sends him to a planet for him to be eaten by a Giant One-Eyed Monster sitting on a Rock who proceeds to chomp on his head, killing him instantly. 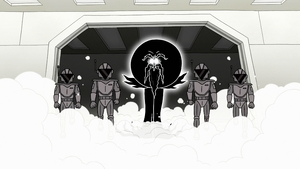 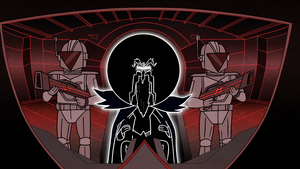 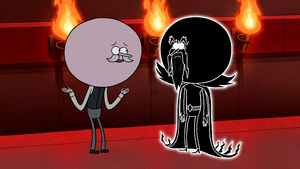 Anti-Pops and his twin brother Pops trying to discuss a peace talk. 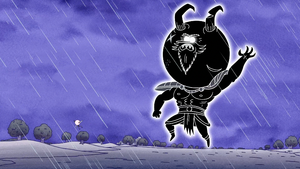 Anti-Pops in his super form. 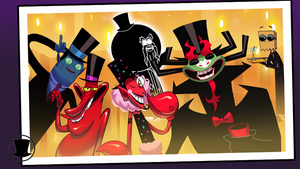 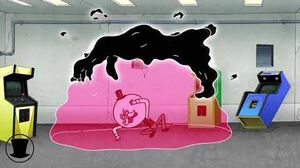