Dimwtted Aliens
Anti-Pops' Minions are major antagonists in the eighth and final season of Regular Show. They are a team of four nameless and dimwitted alien bounty hunters led by the Gorilla Alien and who serve as henchmen to the show's overarching antagonist Anti-Pops.

They were voiced by Matthew Mercer, Vanessa Marshall, and Fred Tatasciore.

They first appear in "Space Escape" during Anti-Pop's attack on the Space Tree by capturing some of the students and staff. They then go around the space tree looking for Pops. When Rigby drops a bag a chips next to them, the Gorilla Alien accuses the Lizard Alien of smuggling snacks from them until they are knocked out by Skips. Later, they go into their ships to chase after the park employees who are escaping in their dome and destroy anyone in their way. They almost succeeded in capturing them when suddenly they were all stopped by Chance Sureshot and his crew, which allowed the Park Employees to escape.

They then appear in "A Regular Epic Final Battle" traveling to Lolliland with Anti-Pops to fight his brother Pops. When their ship gets into an accident, they call a taxi. They all get into the back, but Anti-Pops forces the Gorilla Alien to switch places with him in the front, much to his dismay. When they all arrive at the Lolliland Colosseum they prepare to attack. When Pops and Anti-Pops make a wager they decide to stand down, but is was all a trick and they start attacking Pops with their blasters. The Park Employees then fight back the hunters with both sides getting some extra help. They head back to the taxi and shoot down Rigby's ship, but are then shot down by Chance and his crew and crash into the Lolliland guardian’s arm. In the end they are erased from existence by Anti-Pops in his titan form.

It's unknown if they were revived by Pops after his sacrifice. 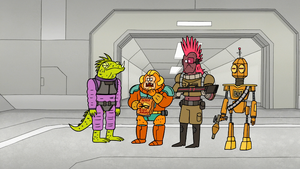 The Anti-Pops' Minions in the Space Tree Station. 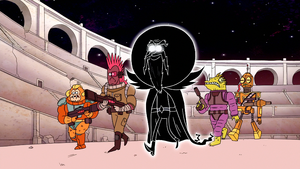