Villains Wiki
Register
Don't have an account?
Sign In
Advertisement
in: Corrupt Officials, Organizations, Date A Live Villains,
and 18 more

Not to be confused with Anti Spirit Team, the AST are a secret battalion of Japan Ground Self-Defense Force forces, Anti Spirits Teams, are referring to all the organizations of the AST in the World.

Unknown, but it was created soon after the space quake that caused by the First Spirit 30 years ago

In many countries of the world

Maintain the segurance of the humanity from the Spirits.
Eradicate the forces of another world.

The Anti Spirits Teams are diverse global organizations that are located in various countries around the world, as well as the Anti Spirit Team from Japan, they are composed of military users of technological magic with the help of science.

The Anti Spirits Teams are a special unit within the Military World Forcers that is designed to suppress and ultimately eliminate the threat posed by Spirits. As the AST from Japan, they utilize Combat Realizer Units layered on top of combat wiring suits to enhance normal human capabilities while providing offensive and defensive combat capabilities.

The foundation of Anti Spirits Teams is unknown, as well as those who also created, at some point in history, the AST was created soon after the spacequake that caused by the First Spirit 30 years ago, since that incident that killed more than 150 million people, the military found that there were things that were appearing in earth and causing more of these spacequakes around the entire planet, for attacks against these things, they created a secret battalion of special forces in each military forces of each country to fight these beings that caused chaos in humanity.

They named them Anti Spirit Team, which was mainly composed of younger women who have had their families killed by these beings, and seeking revenge, they came to these secret squads that were kept away from the knowledge of mankind.

The AST personnel are intransigent bunch who views ALL Spirits as threats to humanity and therefore Spirits must be killed on sight with no questions asked, leading to violent confrontations with Ratatoskr Organization. (Ratatoskr insists Spirits and humanity must coexist through talks and negotiations, leading to parallel quarrel regarding how to deal with Spirits) 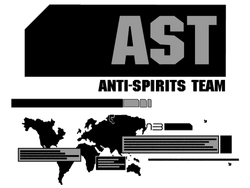