Defeat his good counterpart, Jesus Christ.
Brainwash humanity into worshipping him as "god".
Assist Satan in overthrowing God and claiming His throne.

The Antichrist (erroneously spelled as Anti-Christ) is an end-times false messiah who, as the name suggests, is the complete opposite and ultimate enemy of Jesus Christ.

He is part of the Unholy Trinity, which he, Satan, and the False Prophet constitute. His most prominent role in the Bible is shown in the Book of Revelation. The identity of the Antichrist (so far) is mysterious.

He is considered to be the second most evil character in the Bible after Satan. However, considering that he was able to unleash havoc and horrendous persecution upon humanity much more freely than Satan, he may be on par in terms of evilness.

It is unknown whether the Antichrist will make himself known to everyone before or after the Rapture, an event where millions of Christians worldwide are suddenly raised into the air to reunite with God. Biblical Scripture, however, indicates that the Antichrist shall rise to power as a global dictator, initiating the Tribulation, an event that is worse than the worst event in history and will last for seven years.

Meanwhile, the long-prophesied Third Temple will be constructed on Temple Mount in Israel, where Jews will make offerings to God. Halfway through the Tribulation, the Antichrist reveals his true colors by betraying Israel, effectively breaking the seven-year covenant, and invading it. He will also declare the temple offerings to be illegal. Despite this, many Jews will repent as a result of this devastating betrayal. The Antichrist is suddenly assassinated but somehow, presumably through Satan's power, he is resurrected, mocking how Jesus died and rose from the dead. Unsatisfied with his current empire, the Antichrist destroys the Whore of Babylon and demands everyone to worship him as a god. Besides the Christian God, he even shows disdain for the other gods that the Bible condemns as "false gods", showing how completely insane the Antichrist is. Meanwhile, two witnesses will prophesy on the streets of Jerusalem, calling for humanity to repent, but after 1,260 days, the Antichrist will kill them and leave their bloodied bodies on the street. Their murder will be broadcasted worldwide and the Antichrist will encourage humanity to rejoice over their deaths. However, they are revived 3.5 days later and taken to Heaven, much to everyone's shock. One hour later, a great earthquake will strike and kill 7,000 people. In Heaven, the archangel Michael and his angels wage war against Satan and his demons, with Satan losing. Satan and his demons are permanently shut away from Heaven (they could previously accuse God's people in Heaven's courtroom). Satan realizes that his time is short and decides to possess the Antichrist to achieve his ultimate plan: To be worshiped as God. Possessed, the Antichrist sets up image of himself in the Third Temple and proudly blasphemes God in front of everyone in an event known as the Abomination of Desolation. The False Prophet will also perform many demonic miracles, such as bringing fire down from Heaven, to "prove" that the Antichrist is the Messiah. After that, the Antichrist will force everyone to worship him and take the Mark of the Beast (666) on their hands/foreheads, under the condition that they won't be able to buy and sell goods if they didn't. He will punish those who refuse to participate by persecuting them, jailing them, and executing them in a worldwide genocide. Jews will also be targeted in this genocide, which will be worse than the Holocaust, prompting them to call for Jesus to return.

During the final years of the Tribulation, the Antichrist, along with the False Prophet and several nations, come together in the Battle of Armageddon, which traditionally coincides with the Second Coming of Jesus Christ. Darkness and more intense natural disasters will be inflicted upon the world as a result; those who took the Mark of the Beast will also be severely crippled by these judgements. Jesus Christ and His armies, consisting of angels, past saints and those who were raptured earlier, will appear in the heavens, prompting the Antichrist and his armies to attack in an intense moment of apocalyptic warfare. Jesus shouts fire from His mouth in time, which destroys the majority of the Antichrist's armies. The Antichrist, along with the False Prophet and their followers, meet their deserving ends as God throws them into the Lake of Fire, where they burn for eternity. Satan is presumably exorcised from the Antichrist as an angel separately imprisons him in a bottomless pit for 1,000 years. With the Antichrist and the False Prophet gone and Satan imprisoned, Jesus establishes a universal kingdom on Earth, where many people come to worship Him in peace and prosperity for 1,000 years. 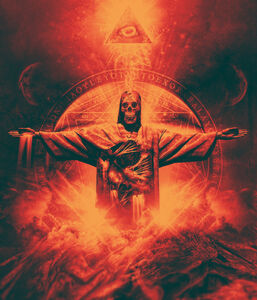 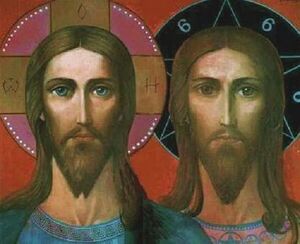 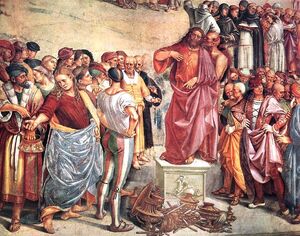 People gather to listen to the Antichrist, whilst being empowered by Satan.
Add a photo to this gallery

Retrieved from "https://villains.fandom.com/wiki/Antichrist_(theology)?oldid=3233573"
Community content is available under CC-BY-SA unless otherwise noted.