To spread chaos and destruction.

Antisepticeye, or Anti in short, is one of the main antagonists of the famous Irish YouTube channel Jacksepticeye and is the fan-made split personality of Jacksepticeye (Seán McLoughlin).march 5th is when he took over

Antisepticeye is a darker and evil version of Jacksepticeye. The general idea is that he is a demon, or virus, that is fighting for control over Jack's body. Antisepticeye's personality is usually demented and with a strong desire to harm others. It is thought that the fan made Darkiplier had fueled the idea of Antisepticeye.

Since the beginning of October 2016, there have been brief clips within Jack's videos that resemble Antisepticeye. They began in his playthrough of Five Nights At Freddy's Sister Location. In the description of these videos, there are ominous messages and sometimes links using zalgo font that add to the persona. As well, Jack's Twitter and Tumblr accounts have featured the same font and personality, suggesting Antisepticeye is "taking over". Even in videos where Antisepticeye isn't present, the white board on the door will occasionally contain vague messages that relate to him. When fans ask about or point out Antisepticeye, Jack responds as if not knowing who they're talking about.

In Facerig episode three, Jack uses a flower face named Flowey from Undertale; while using it he says "down here, it's kill or be killed." After this, Antisepticeye's laugh is heard, however Jack might just be goofing around.

On Halloween (October 31, 2016), Jack made this video, officially confirming Antisepticeye's arrival. In this video, Jack is seemingly recording an innocent vlog of him carving a pumpkin (similar to the previous year 2015). The white board on the door has the words "Happy Halloween!" written on it. As the video continues, an eerie laugh is heard and the camera becomes distorted. Jack briefly steps away from the camera to investigate. He returns to the camera, acting rather strangely, and continues carving the pumpkin. Then, the sound of someone stomping can be heard, and Jack once again leaves to look for the source of the sound. At random intervals, the camera turns distorted just as before, but Jack remains oblivious. At one point in the video Jack's nose starts to bleed and he briefly steps away from the camera to get some tissue. When he comes back he pretends it never happened. Towards the end of the video, Jack stares blankly at the camera and begins to slit his throat with the knife in his hand, causing him to bleed to death and fall onto his pumpkin. After many seconds of silence, Anti possesses Jack and jumpscares the viewers. The words on the whiteboard are now scribbled out. Anti jeers at the viewers, blaming them for Jack's death. He says the viewers could've stopped him from doing it, but they just watched. He declares that Jack is "gone forever" and asks the viewers to say their goodbyes. Finally, the video cuts to black and ends.

6 months later in July 28, 2017, Markiplier made a video on his channel titled "DARKIPLIER vs ANTISEPTICEYE". During the video, the two were arguing about who should be "king" of their "realm" (dubbed "YouTube Hell" in the comments). The two were about to fight, however they were constantly disrupted by other YouTubers dark sides (ABlazingPhil (AmazingPhil), DannyDarko (DanTDM), Sharkyoho (Schmoyoho; second and songify channel of the Gregory Brothers), etc). Then Chica, Dark's dog, appears and sucks the other dark sides into a void. She becomes angered, saying that Dark didn't feed her. As Dark panics, Anti stares at the screen (actually staring at Chica), laughing. Anti played a more insane role than a serious, evil one. BioInc3

6 days later on August 3, 2017, Anti appears in Bio Inc. Redemption. At the start of the video, Jack explains that the developers made an Easter egg of him in the game. Then he starts feeling 'sick', so rushes off camera. Dr. Schneeplestein replaces him and vows to save Jack in game. Halfway through, Dr Schneeplestein himself complains of discomfort and makes references about death and Anti (such as 'antidepressants'). Anti glitches into the face cam and game more frequently, taking over Dr. Schneeplestein. When in-game Jack finally dies, Anti appears. He berates the viewers by saying he's tired of repeating the same cycle (quote: "How many times must I do this? Again and Again! OVER and OVER! FUCKING CIRCLES!") meaning he is tired of killing Jack just so Anti can appear to please the audience. He also mocks the viewers when they call him "glitch bitch" (a nickname fans gave him online). He asks a few questions, such as "who do you think you've been watching all this time?" responding with "my puppets". He states that this is his world and this isn't the end of him. The video cuts to black as he giggles and says "see you soon".

83 days later on October 25, 2017, sounds and effects related to Antisepticeye appears in Opening Tour Gifts. When he receives a knitted Anti doll, Jack says, "little anti. Look at him glitching out all over the place." A sound of giggling can be heard and the screen glitches. This happens a second time when Jack presents a painting of Anti someone made for him, with the screen glitching.

Since 10pm GMT on December 15, 2017 until 6pm GMT on December 16, 2017, Jack's live stream for 'Save the Children' was hijacked by Antisepticeye. After leaving CCTV footage overnight, with creepy sounds and glitches, when Jack and co return for the second stream, the alphabet on the wall spells out 'ANTI'. After welcoming the audience back to the stream, Jack hurries to get changed; while doing so, a reiteration of Anti from the Bio Inc. video appears in the window, only for Jack to return to describe the unusual tension in the air. While opening gifts to donate to the charity, Ethan receives a decapitated teddy bear, with PJ saying the cut looks like its done by a knife. When a donor leaves a message, saying they "love Jack, Robin and Anti", Jack questions Robin asking: "Who is Anti?" The hashtag #Overnightwatch was used and multiple videos have been recorded of Anti's return. Fans (over 10,000-4,000 of them) stayed for over 24 hours to see Anti's arrival, some appearances took hours to see. Many people have realized how videos, pictures, and quotes from the stream come from some of his previous sightings. 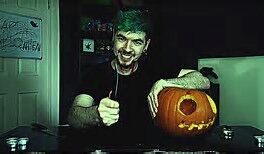 Add a photo to this gallery
Retrieved from "https://villains.fandom.com/wiki/Antisepticeye?oldid=2883495"
Community content is available under CC-BY-SA unless otherwise noted.