The King of Cuisine

Antoine Thomas, also known as The King of Cuisine, is one of the psychopaths in the videogame Dead Rising 2. He can be found late in the evening in the first day that Chuck Greene encounters throughout the game. He is voiced by Scott McNeil.

When Chuck meets Antoine, he appears to be making food. When Chuck notifies him of his arrival, Antoine mistakes Chuck for a food critic, coming to taste his food. However, Chuck sees what Antoine is using as ingredients: survivors. When Chuck comments on Antoine's food, saying "Who the hell would want to eat THIS?!".

Antoine becomes infuriated, grabs a meat cleaver and then swings it at Chuck Greene. Antoine fights with Pans, Kitchen Knives, and Plates. From time to time, Antoine will retreat and eat food that's scattered throughout the restaurant, but doing so leaves him vulnerable to any attacks. After Antoine is defeated, he then slips head first into a vat of boiling hot grease, burning him and killing him. 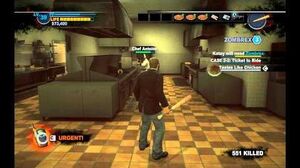 Retrieved from "https://villains.fandom.com/wiki/Antoine_Thomas?oldid=4080577"
Community content is available under CC-BY-SA unless otherwise noted.