General of the Soviet Armed Forces

General Anton Vladimirovich Charkov (Russian: Антон Владимирович Чарков) is a supporting antagonist in the 2020 video game Call of Duty: Black Ops Cold War. He is a Soviet officer and KGB official who learned that his close friend, Dimtiri Belikov, was a mole for the CIA and was trying to help them infiltrate the KGB headquarters. Charkov's fate is left up to the player, as he can be killed, framed, or avoided in the mission, "Desperate Measures".

He was voiced by Adam Tsekhman, who also played Phears in One Night in Doom House.

Anton Vladimirovich Charkov was presumably born during the 1940s in Russia, and joined the Soviet Armed Forces during the height of the Cold War. He befriended Dimitri Belikov, and from dialogue that the two can have in his office, the two served in the Vietnam War and the Afghan War, and were Mi-24 pilots. Another hint of dialogue from Belikov states that he and Anton survived their platoon during the Vietnam War, and Charkov states that sometimes he wishes he could swap places with his fallen comrades. Before the events of the game, Charkov married a woman named Anna, and it's implied that Belikov attended the wedding, as he states that Anna was a "beautiful bride" when looking at a photo of her in Anton's office. Charkov managed to reach to the rank of general, and became a official within the KGB and took a desk job alongside Belikov, but Anna wanted Anton to retire to the country. Though loyal to the Soviet Union, he expresses a cynical outlook on his job, telling Dimitri that he does miss missing flying helicopters.

By 1981, the KGB began a investigation on finding a mole who was embedded in the KGB headquarters, and Belikov and Colonel Lev Kravchenko were tasked with finding them. Unbeknownst to the KGB, Belikov was the mole and was assisting the CIA into stopping Soviet threats. Charkov learned that Dimitri was the mole, but didn't tell his superiors presumably due to his friendship, and possibly wanting to place him into custody. Secretary Mikhail Gorbachev and Imran Zakhaev then gave Anton security clearance with the bunker key, and Charkov was also tasked to interrogate Piotr Ivanov, who was accused of working with the enemy. After the meeting with Secretary Gorbachev, Belikov realizes that he needs to handle Charkov and get the bunker key for Russell Adler and his team.

If left alive, it's assumed that Charkov exposed Belikov as the mole to the Central Committee, but was too late to stop Dimitri from escaping from the KGB headquarters. If incarcerated, it's assumed that Charkov was able to prove his innocence, or the KGB figured out that Belikov was the mole. No matter the choice on how to deal with Charkov, Belikov will be exposed as the mole within the KGB, and is nearly killed by Spetsnaz. However, Adler and "Bell" save him and they the trio manage to escape from the KGB headquarters with the assistance of Eleazar "Lazar" Azoulay. 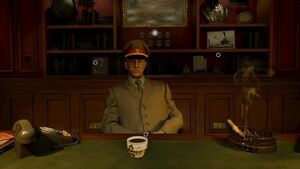 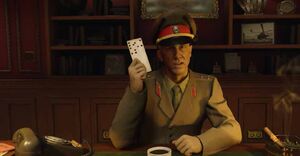 Charkov telling Belikov that he knows he's the mole (player-determined). 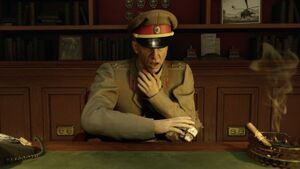 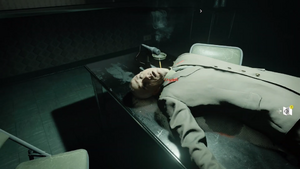