No Country for Old Men

Kill Carson Wells.
Obtain the missing drug money and return it to his bosses.
Escape Texas before getting compromised (all succeeded).

Anton Chigurh is the main antagonist of the 2005 novel No Country for Old Men by Cormac McCarthy and its 2007 film adaptation of the same name.

Depicted as a ruthless hitman, he is among the most prominent characters of the unstoppable killing machine genre. He is the archenemy of Llewelyn Moss, the man whom he is after.

He was portrayed by Javier Bardem, who also played Felix Reyes-Torrena in Collateral, Raoul Silva in Skyfall, Felix Marti in The Gunman, Armando Salazar in Pirates of the Caribbean: Dead Men Tell No Tales and Him in mother!.

In the novel, Anton is portrayed as the main antagonist, even though he never shared a scene with the story's main protagonist, Ed Tom Bell. His main weapon of choice is a Captive Bolt Pistol, which he uses to smash holes in human skulls or open door locks. He also uses a silenced semi-automatic shotgun, which comes in handy in the scene where he single-handedly killed a group of Mexicans who were sent to kill Chigurh's target, Llewelyn Moss. He also carries with him a TEC-9 pistol. He also collects coins which he always carries for luck.

In the movie he appears wearing tough jeans, leather boots and bowl cut hair and has brown eyes (as opposed to blue eyes in the book). Sometimes before he kills his victim, he plays a coin toss. He has a great deal of endurance. Capable of withstanding pain from a shotgun ricochet and a broken or fractured arm. He also has a broad medical knowledge and can even take care of his own wounds. He also shows some level of intelligence as seen when he escapes a sheriff's precinct and steals medical supplies from a drug store filled with civilians and security.

Not much is known about Anton Chigurh's past, with the only things people being able remember about him are a very weird hair style and a tendency to kill without hesitation or emotion.

Chigurh has a talent for improvisation, like using an antique coin to open an air vent, killing a policemen with his own handcuffs and using a boy's shirt as a sling.

Chigurh is a hitman who has no remorse or compassion for other human beings. He is described by one character in the novel as a "psychopathic killer", even being compared to the bubonic plague. His main weapon of choice is a captive bolt pistol, which he uses to either kill his victims or to destroy cylinder locks on doors. He also wields a suppressed semi-automatic shotgun and pistol (a TEC-9 in the film adaptation). In 1980, he is hired to retrieve a bag of money from a drug deal that went wrong, but discovers that a hunter named Llewelyn Moss has taken it already and has left town. Chigurh tracks Moss down to a motel using a receiver that connects to a transponder hidden in the satchel of money.

However, Moss unintentionally tricks Chigurh into believing he was in the room next to his when he hides the money in the ventilation system. That room was being occupied by a group of Mexican gangsters who were set to ambush Moss. Chigurh brutally murders the Mexicans (one of them begged Chigurh not to kill him, only for him to shoot him anyway) and searches for the money, but it is nowhere to be found as Moss heard the gunshot and hastily left the motel with the money.

Moving to a hotel in the border town of Eagle Pass, Moss discovers the tracking device as he wonders how there is someone managed to track him down, but Chigurh has already found him. Their firefight spills onto the streets, killing a bystander, and wounding both. Moss flees across to Mexico, stashing the case of money in weeds along the Rio Grande.

Chigurh finds out about a bounty hunter named Carson Wells who, like Chigurh, has been hired to retrieve the bag of money. Chigurh kills Wells after Wells tries to make a deal with Moss. Chigurh ruthlessly tracks Moss down until Moss is eventually killed by Mexican gangsters at another motel. Once again Moss hid the money in the vents, which was unseen by the Mexicans at the time of their ambush of Moss. However after his experience with Moss before, Chigurh knows where the money will be. He arrives at the scene of the crime after the police have left, retrieves the money from the vent and returns it to his employers.

Near the end, Chigurh pays a visit to Moss' grieving widow and debates whether or not to kill her, relying once more on her to call a coin toss; with reluctance, he ultimately kills her. After leaving her house, Chigurh is involved in a car crash, leaving him badly injured with a compound fracture of his left ulna and walking with a limp. He then offers money to a teenager on a bicycle to give him his T-shirt. He and the teenager create a sling for his injured arm and Chigurh leaves the scene before the ambulance arrives.

Anton Chigurh is nothing more or less than an ultimate personification of psychopathy, havoc and antisocial tendencies. He is sadistic, cold-blooded, and unsympathetic, as he enjoys killing people following the reason that he is also emotionless and antisocial. Most of all, his most known feature is that he is quite remorseless. He kills without any remorse or debt but always with deliberation. Judging from his killing penchant, he has a fondness in murdering old people.

Chigurh is described as an unstoppable and cold-hearted evil and as a man whose having his own set of morals, although that they are twisted. While he is not killing at random or without any purpose, his reasons sometimes can be abstract. His personal hobby is more than only killing people or wreaking havoc is to decide people's fate. He sees in himself as sort of a hand of a fate, and as a special instrument which exacts what is supposed to happen upon those which he see accountable.

He gives his various victims he encounters a chance to survive by making deals, either personally or by flipping a coin, as he once says "What's the most you've ever lost on a coin toss?" In the novel, Chigurh is depicted as a man of great endurance, capable of withstanding the pain of a fractured arm and multiple gunshot wounds, among others. In the film, Anton kills or attempts to kill nearly every person as he meets. The only people he spares are the gas station proprietor who correctly guesses his coin flip or the woman at the very trailer park just as Chigurh hears a toilet flush, the woman at the front desk of the hotel, and the two bicycle riding kids who give him one of their shirts after Chigurh's car accident.

Critics have praised Javier Bardem's portrayal of Chigurh, which won him an Oscar, a Golden Globe and a BAFTA for his performance. Chigurh has been added to numerous lists of greatest villains; UGO.com has ranked him #10 in Top 11 Psychopaths, and he is ranked #44 in The 100 Greatest Movie Characters on Empire.com. He has also been parodied in The Simpsons and Disaster Movie. 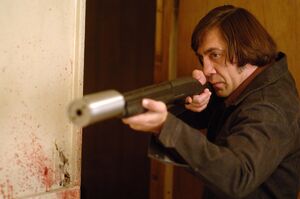 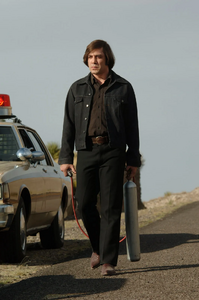 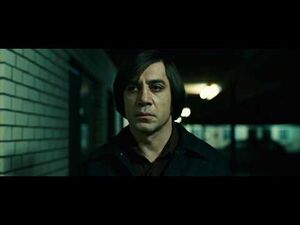 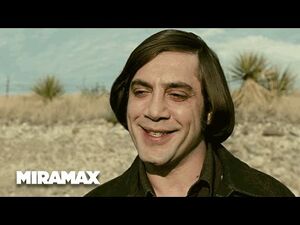 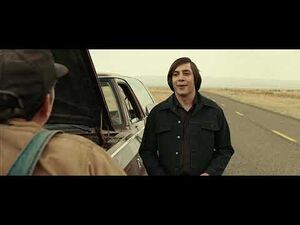 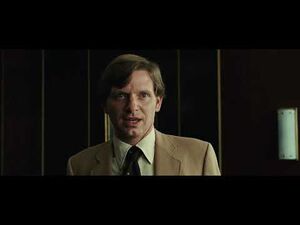 Do You See Me? Anton Chigurh Office Accountee - No Country for Old Men (2007) - Movie Clip HD Scene
Do you see him? 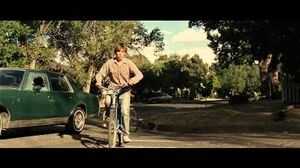