Anton Saric is the High Commander of the New Helghan Security Forces and is a supporting antagonist in Killzone: Shadow Fall. Following the destruction of Helghan, Saric has been seeking vengeance against the Vektan population and has gained a reputation for his sadistic and cruel methods of interrogation especially against Vektans. He is the High Commander of the Helghast Security Forces.

He is voiced by Andreas Beckett.

Not much is known about Saric but he did manage to witness at first hands the destruction of Helghan in 2360 at the hands of the terricide. He managed to survive but he had grown overtime to loath and hate the Vektans since the enemies of the Helghan Empire were Vektan Human colonists. When the State of New Helghan was established, he was put in charge of the Helghast Security Forces and became the High Commander of the organization and was given the responsibility of protecting the Helghast people. Saric had quickly gained a reputation of being a sadistic commander for his oppressive tactics such as surveillence and lethal force against anyone declared Enemy of the State.

In Killzone: Shadow Fall Saric appears in the introduction where he is seen dragging Lucas Kellen into the Vektan-Helghast Border wall to swap Kellen for Maya Visari, daughter of Chancellor Hera Visari and after interrogating/torturing him for breaching Helghast territory, he then sends him to the border and talks about how he feels disgusted that he and the Helghasts are forced to live side by side with the Vektans and then claims that the wall will fall and the Helghasts will conquer Vekta. After a short fire fight erupts, Saric escapes and Echo and Kellen reunite with their factions.

Saric is then seen again where he is torturing Lucas after he was caught breaching New Helghan's borders after Lucas failed to capture Black Hand terrorist leader Vladko Tyran. He then beats him and forces him to tell him everything Kellen knows and claims that he has captured his contact, a secret Helghast informant and leaves the room and soon Chancellor Visari walks in but not before he electrocutes Lucas unconscious. In Chapter 10: The Savior, he is heard giving instructions to Echo for her assassination of Thomas Sinclair to prevent war between the Vektans and the Helghasts.

Saric appears to be in his 30's or so and wears a traditional Helghast mask but without a combat helmat. His skin is grey and he wears Helghast combat armor with armor platings on his limbs and he wears a black/dark grey trench coat with the Helghast triad armband on his arm.

Saric is a dark, cruel and sadistic individual who is shaped by the destruction of his homeworld of Helghan. He uses his position of power to tortureany prisoner he's given especially humans and does it out of sick pleasure and revenge. 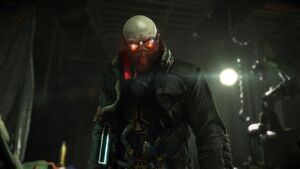 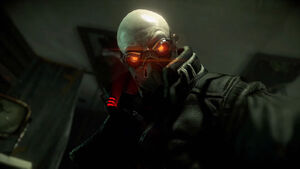 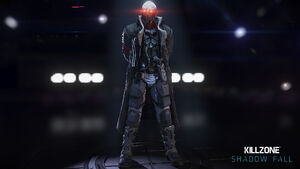 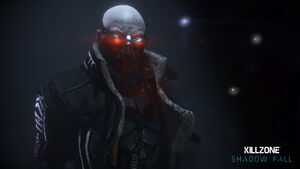 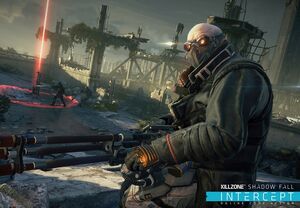